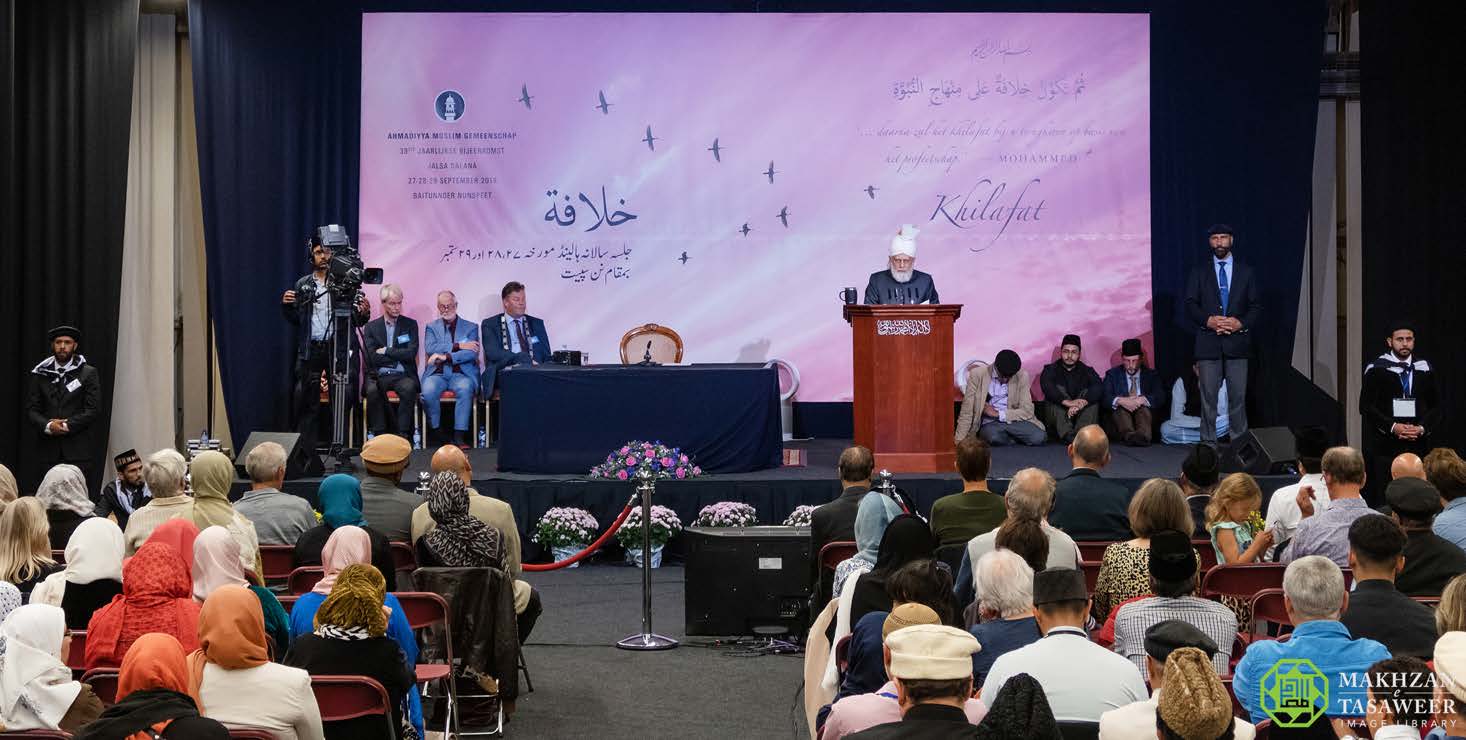 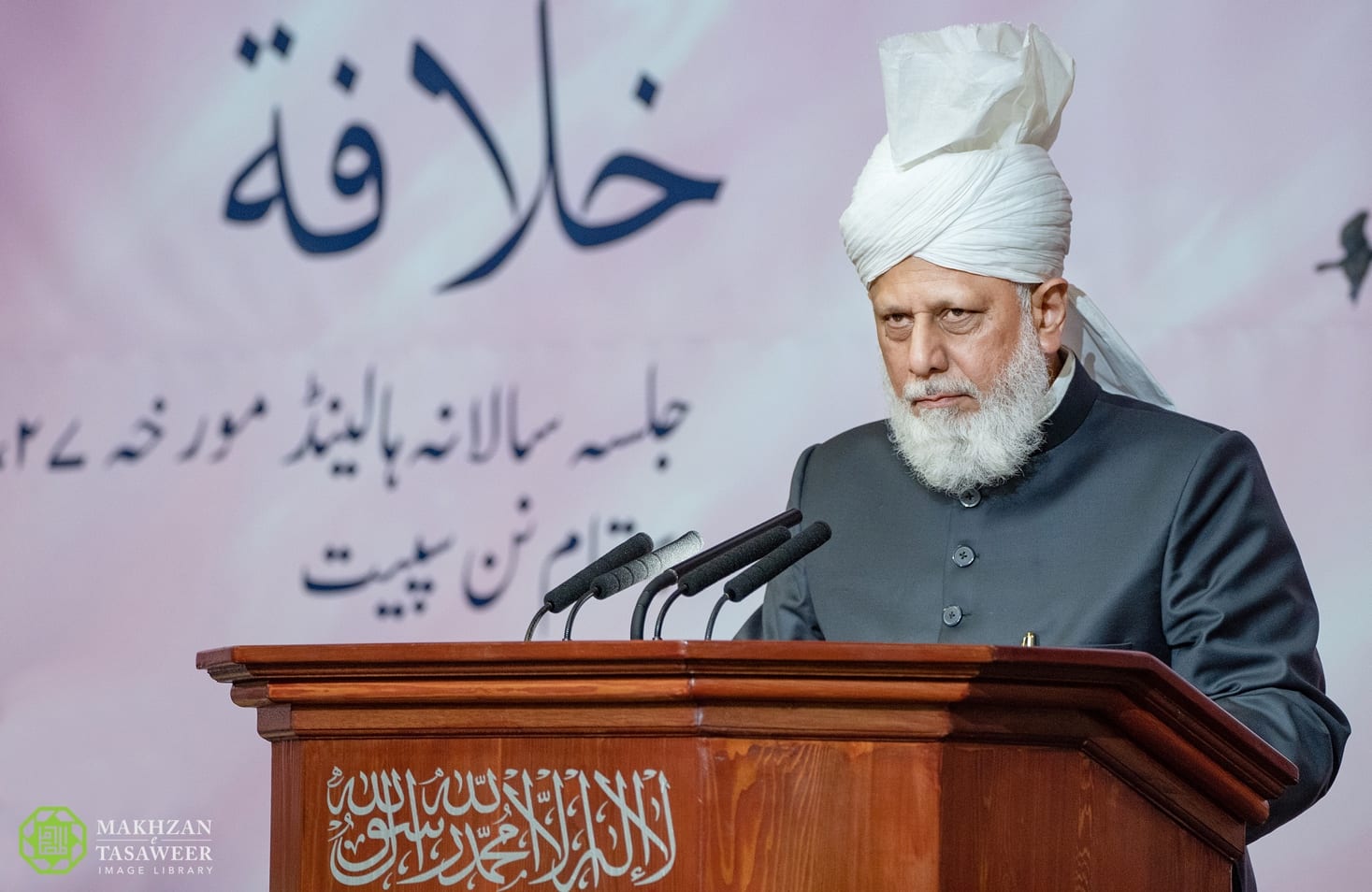 During his address, Hazrat Mirza Masroor Ahmad presented a comprehensive definition of ‘peace’ and outlined the teachings of Islam that led to both ‘inner’ and ‘outward’ peace.

His Holiness also outlined the far-reaching consequences of modern-day conflict and warfare and said that despite world powers making claims of establishing peace, it had been proven time and again that their real objectives have been to

‘protect and enhance their vested interests’.

Contrasting such behaviour with Islamic teachings, His Holiness stated that Islam teaches the principle of

and said that wherever there was disconnect between a person’s words and acts it caused instability and conflict. 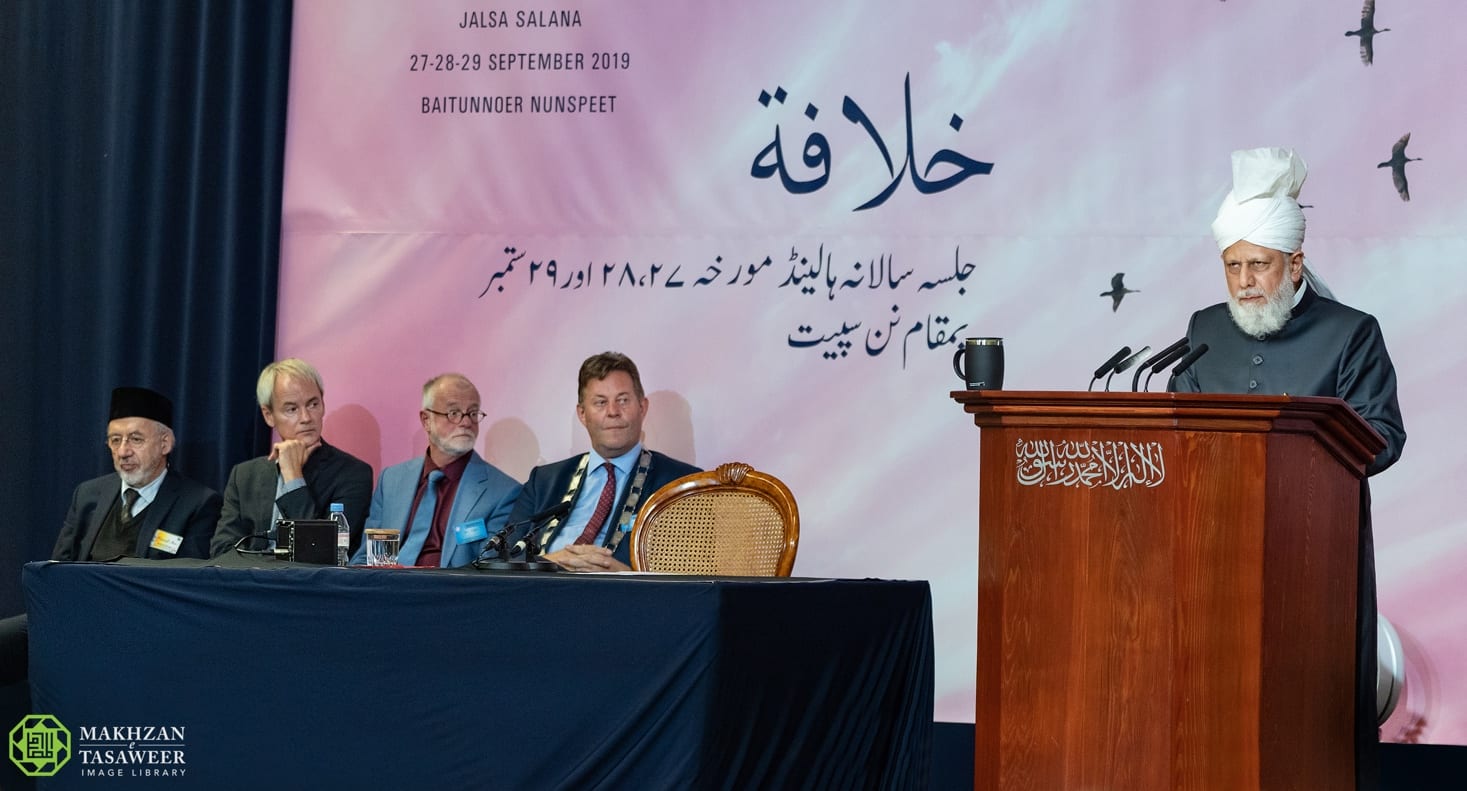 Early in his address, Hazrat Mirza Masroor Ahmad said the character of the Holy Prophet Muhammad (peace and blessings be upon him) has long been slandered in the non-Muslim world and that certain individuals from Holland in the recent past had taken lead in

His Holiness underlined that

were the cornerstones for building peace.

“Religion is a personal matter for every individual. It is a matter of the heart and no one has the right to speak ill of the beliefs of other people. No one should mock what others consider sacred because treating other people with derision and contempt can only lead to pain and suffering and create division. Conversely, tolerance and mutual respect are the cornerstones through which we can build a peaceful and harmonious society.”

His Holiness went on to elucidate an in depth understanding of what constitutes ‘peace’ and the distinction between ‘outward’ and ‘inner’ peace.

“Often, at a superficial level, people can appear to be happy and content. Yet, though they have ‘outward peace’, they remain bereft of ‘inner peace’.”

His Holiness said that despite having worldly possessions and wealth, people are still

“plagued by anxiety and their hearts remain unfulfilled.”

“The reality is that until a person attains inner peace, their material comforts are worthless. Simply put, the one thing money cannot buy is inner peace.”

His Holiness said that in both the developing and the developed world mental health issues were on the rise. This was proven by increased rates of suicide and depression in many countries.

“In today’s world, critics are quick to blame religion and particularly Islam, for the problems of the world. Yet, many people who are suffering from inner torment and unrest are those who live a purely secular existence and so their problems cannot be blamed on Islam or any other religion. As a religious leader, I firmly believe that instead of being the cause of today’s problems, religion is the answer.”

“A golden principle given by the Founder of Islam (peace and blessings be upon him) is that a true Muslim‘should like for others, what he likes for himself.’ I believe that this simple and profound point, if acted upon, not just by Muslims, but by all people, is the means for everlasting peace in society.”

“No doubt, everyone desirespeacefor themselves and their loved ones, but most people will be lying if they claim that they want their opponentsandcompetitorsto have peaceand to live with contentment. Yet this is the standard of nobility and generosity of spirit that Islam requires. It is a religion and teaching that promotes selflessness and urges humans to discard all traces of selfishness.”

His Holiness said modern society has failed to live up to this standard, and this was reflected in the foreign policies of many rich and powerful countries.

“It has been a constant theme of modern history that dominant powers have sent their armies to distant lands, on the pretext of establishing peace, but time has proven that their real objective has been to protect and enhance their vested interests. During such conflicts, if just one of their soldiers dies there is an outpouring of grief and they pledge to take revenge. Yet, when their bombs or munitions cause the death of hundreds or even thousands of innocent civilians – including defenceless women and children – they remain silent and do not express any hint of regret or remorse.”

Due to the interconnected world we live in, His Holiness said, the rest of the world

“would be foolish to think that they will not also be affected.”

His Holiness further shed light on the duplicitous actions of certain world leaders and said that while all strongly condemn warfare and claim to promote human rights, their cries are only in favour of theirpeople and theirinterests, whilst at the same time they are themselves guilty of

“exploiting civil wars or conflicts within other countries for their own benefit.”

“Major powers have habitually interfered in the conflicts of other countries by arming or funding whichever side supports their interests. They are pouring petrol on an open flame and the result is that innocent people, including women, children and the elderly, are losing their lives and observing the torment of their families.”

His Holiness said that the conflicts prevalent in the world today were based on geo-political rivalries and material factors and not, as often alleged, due to the teachings of Islam.

“Let it be clear that the state of unrest in the world, whether in Muslim countries or otherwise, has nothing to do with the teachings of Islam. Rather, such turmoil is based on the vested interests and selfish ways of certain leaders or corrupt governments on the one side and rebel, insurgent or separatist groups on the other. It is caused by the brutal acts of terrorist and extremist groups who seek only enrichment or power.”

His Holiness then spoke in detail to refute the baseless allegation that the Founder of Islam, the Holy Prophet Muhammad (peace blessings be upon him) promoted intolerance and warfare.

“The Prophet of Islam (peace and blessings be upon him) taught that Allah the Almighty is the Source of Peace and the Provider and Sustainer of all mankind. Thus, how could it be possible for him to promote intolerance or to sow the seeds of division in society? Rather, throughout his life, he promoted inter-faith harmony and emphasised the need for peace at every level of society – from the basic domestic family unit all the way to international relations.”

Explaining that despite the Prophet of Islam(peace and blessings be upon him) and his companions facing bitter persecution for several years in Makkah where many were brutally martyred and tortured, His Holiness said that the Muslims never retaliated and showed unparalleled examples of patience.

“The patience of the Muslims was based on the command of Allah the Almighty, which is mentioned in chapter 25, verse 64 of the Holy Quran. Addressing the Muslims in this verse, Allah the Almighty said: “And the servants of the Gracious God are those who walk on the earth in a dignified manner, and when the ignorant address them, they say, ‘Peace!’””

“Disregarding a natural inclination for revenge, and, living up to the standard of liking for others what you like for yourself, the Muslims sought peace for their enemies.”

His Holiness further outlined the life of the Holy Prophet Muhammad (peace and blessings be upon him) and said that after continued years of persecution, the Muslims migrated to a city called Medina to flee the persecution and seek religious freedom.

However, His Holiness explained, the disbelievers of Makkah pursued them and waged war against the Muslims and only then were Muslims given the permission to respond with force.

His Holiness explained that even in a state of defensive war, the Holy Prophet (peace and blessings be upon him) instructed that the Muslims abided by the strictest rules of engagement. Furthermore, at all times he sought to bring an end to conflict and warfare and instructed his followers to waste no opportunity for peace.

“Rather than seeking conflict or fostering hatred, Islam has only ever instructed Muslims to knock down the walls of hatred that divide mankind and to build bridges of love and compassion in order to unite it. In short, at every level of society, and across all communities and peoples, Muslims have a duty to spread peace.” 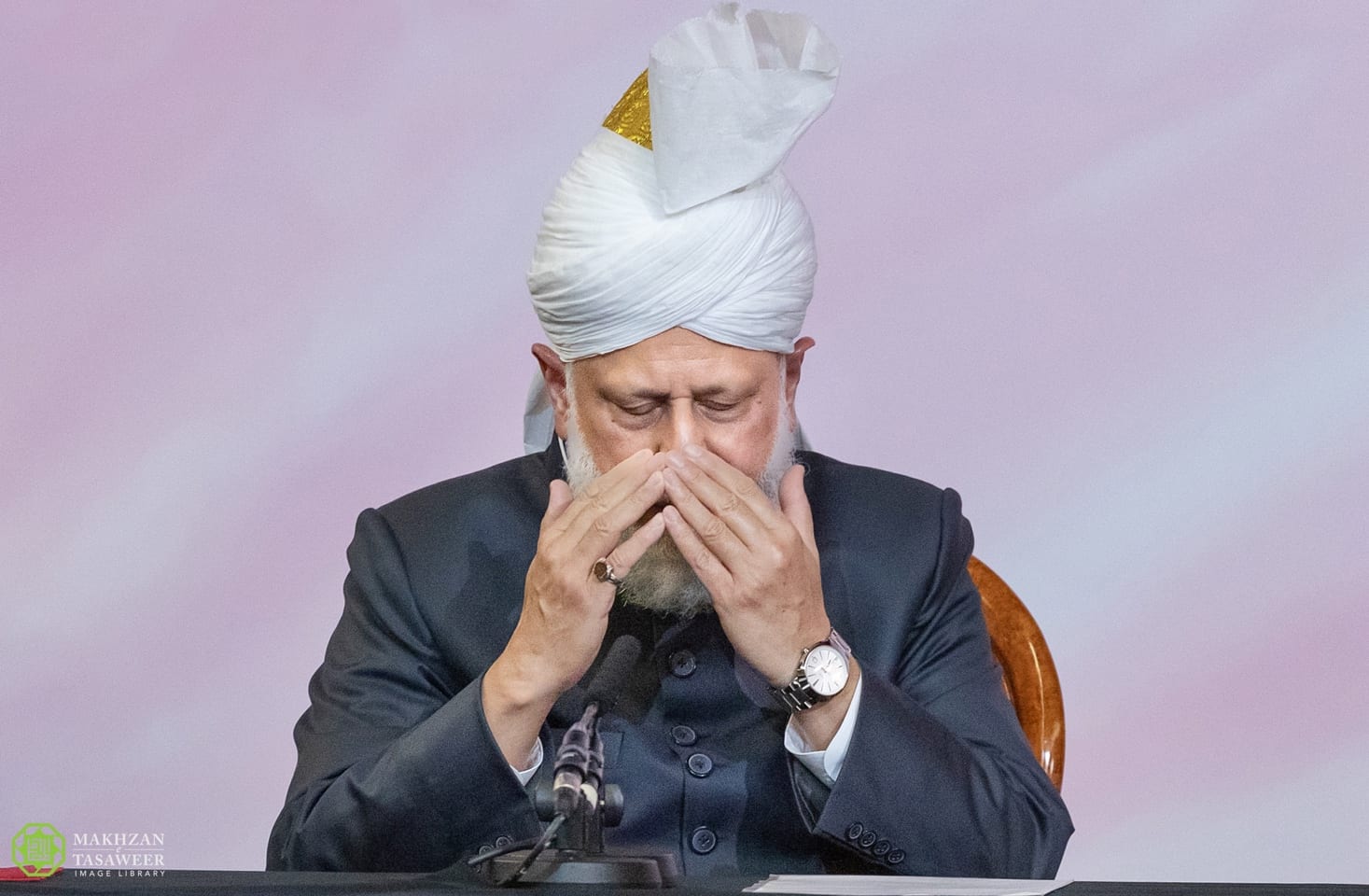 “It is the need of the time that we all join together and instead of inveighing against one another’s religious sentiments, we join forces and work towards building a better future for our children and future generations. Let us set aside our differences and work faithfully towards developing true and sustainable peace in the world. Let us respect one another and strive to build a better society founded upon principles of unity and the common good.”

Earlier in the day, His Holiness, Hazrat Mirza Masroor Ahmad directly addressed the members of Lajna Imaillah (The Ladies Auxiliary Organisation of the Ahmadiyya Muslim Community).

Speaking of the fact that a large number of people had immigrated to Holland from Pakistan, where they were denied religious freedom, His Holiness reminded the attendees that they must show gratitude to their adopted nation and at the same time they must become more devoted to their faith as they now had the freedom to practice it.

Speaking about the need to excel with one another in good works, Hazrat Mirza Masroor Ahmad said:

“A believing man and a believing woman must vie with others in good deeds, rather than always seeking to outdo others in material gains. God Almighty is the most Merciful and Forgiving and is most loving towards His servants who turn to Him. Thus he listens to the pious desires and prayers of His righteous servants accepts their good deeds.”