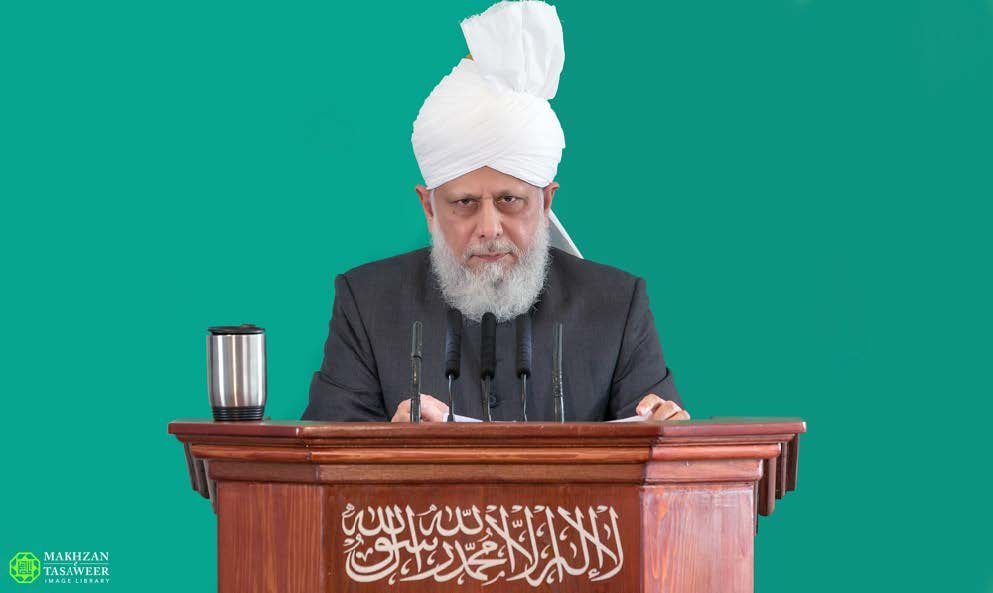 On 9 October 2015, the World Head of the Ahmadiyya Muslim Community, the Fifth Khalifa (Caliph), His Holiness, Hazrat Mirza Masroor Ahmad delivered his weekly Friday Sermon at the Baitun Noor Mosque in Nunspeet, Holland.

During his address, His Holiness said that every Ahmadi Muslim should constantly strive towards moral and spiritual improvement and should seek to be a standard bearer for peace in society.

The Khalifa said that the majority of Ahmadi Muslims living in Holland were of Pakistani origin and had been granted permission to reside in Holland due to the religious persecution they faced in their home country. Thus they bore a heavy responsibility to follow the true teachings of Ahmadiyyat.

“The Promised Messiah (peace be upon him) has said that Ahmadi Muslims should not limit themselves to mere words or proclamations, but should fulfil the true objectives of the oath they have made. He said that if they did not bring about positive changes then there would be nothing that distinguished them from others.”

Hazrat Mirza Masroor Ahmad said that the Promised Messiah (peace be upon him) has drawn the attention of Ahmadi Muslims towards personally inculcating Islam’s true teachings and to spreading its peaceful teachings throughout the world. Therefore it was imperative that all Ahmadi Muslims had true knowledge and understanding of their faith.

His Holiness said that the Dutch people would look to the character of the local Ahmadi Muslims.

“Recently, when I laid the foundation stone for our new Mosque in Almere, I also delivered a brief address. Thereafter, a Dutch lady commented that whilst the words of the Khalifa promoted only peace and were to be applauded, it remained to be seen if the local Ahmadi Muslims would practice what their spiritual leader had preached. Thus, there is no doubt that the local people will be looking at the Ahmadi Muslims living here and so you must continuously assess your own moral and spiritual standards.”

His Holiness went on to speak about the importance of MTA International and said that members of the Ahmadiyya Muslim Community should make particular efforts to watch the Friday Sermon of the Khalifa each week.

His Holiness said that MTA was a means of uniting Ahmadi Muslims across the world and a means for the members of the community to hear the message of the Khalifa.

Hazrat Mirza Masroor Ahmad is currently visiting Holland after a period of 3 years. During his current tour His Holiness has delivered a special address at the Dutch National Parliament and laid the foundation stone for the Baitul Aafiyat Mosque in Almere.