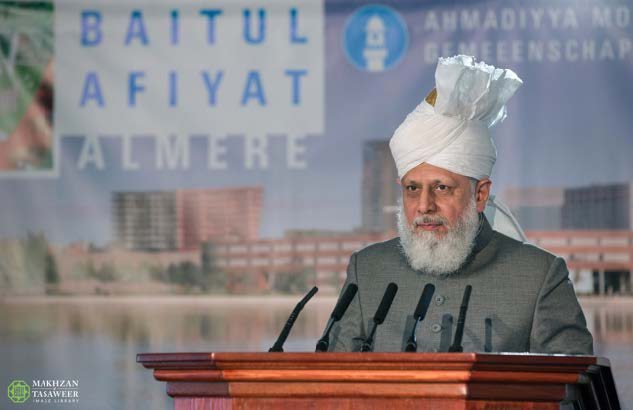 His Holiness has named the Mosque, Baitul Aafiyat (The House of Peace and Security). Upon completion, the new Mosque will be the Ahmadiyya Muslim Community’s second purpose built Mosque in Holland. 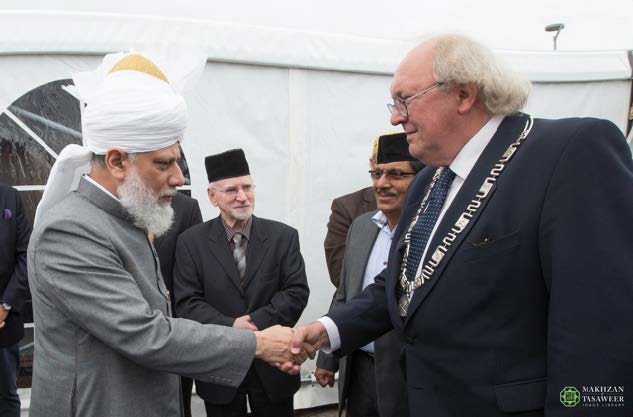 More than 55 guests attended the ceremony, including the Deputy Lord Mayor of Almere, Mr Frits Huis.

The formal session began with a welcome address given by Hibatun Noer, the National President of the Ahmadiyya Muslim Community in Holland.

“Both His Holiness and I were born in the same year but His Holiness has far more wisdom than me and hence I will keep my comments extremely brief. It is much more important for us all to listen to him. All I wish to add is that the key principle of the Ahmadiyya Muslim Community is peace and so you are extremely welcome in Almere.” 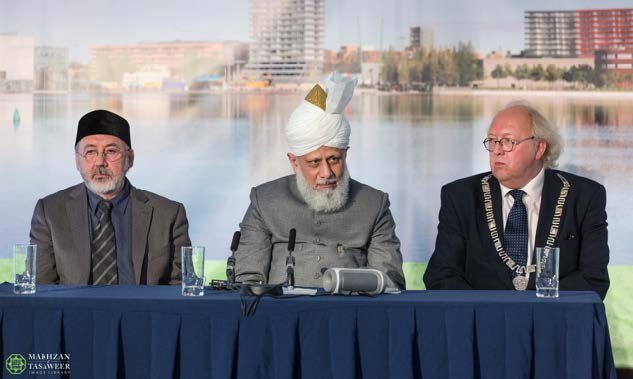 “a means to unite mankind”.

Speaking about a growing fear of Islam in the West, Hazrat Mirza Masroor Ahmad said:

“Regrettably, the state of today’s world is such that many people in the West fear that there is an inherent risk of danger and conflict when Muslims come together or when they build Mosques or centres. In fact, some people think that merely the presence of Muslims in this part of the world will prove to be a means of destroying the peace and security of their society.”

“Therefore, alongside laying the foundation stone, I wish to let the people of this city know that we have named the Mosque as ‘Baitul Aafiyat’ and this means a ‘House of Peace and Security for all people’.”

“The Founder of the Ahmadiyya Muslim Community wrote that the entire world was consumed by danger and peril and so he had been sent to provide peace, security and refuge to all mankind. And so every Ahmadi Mosque, no matter where in the world it is built, is an abode of peace, security and shelter for all of humanity.”

“In our own personal lives, if we build a house, we seek to ensure that it is a place where we feel protected, safe and is a place where we can live with true peace of mind and comfort. Hence, in terms of building a House of God, how is it possible that we could ever seek to construct a Mosque that is a means of spreading harm or a threat to anyone?”

Hazrat Mirza Masroor Ahmad said that the Mosque would be a means of uniting society and bringing people together. His Holiness said that rather than being a threat to the peace of the local society, it would prove to be a source of peace and security. 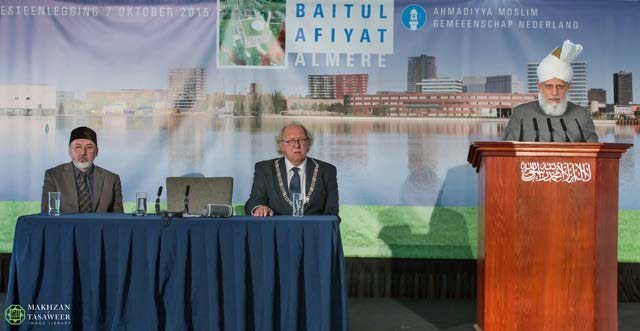 “It is incumbent on a true Muslim to exhibit love and compassion towards all others and to be guardians of the peace of society. Let it be clear, therefore, that this Mosque, whose foundation stone is being laid today, will prove to be a glorious symbol of peace, security and sanctuary for all.”

“This Mosque will never threaten the peace of society. It will never be a means of promoting division or enmity. On the contrary, it will serve to unite mankind. It will create a spirit of true brotherhood and love. Ahmadiyya Mosques are beacons of peace that illuminate society with love, benevolence and mutual respect. From this Mosque you will come to see Islam’s commitment to peace and religious freedom shine forth in every direction.” 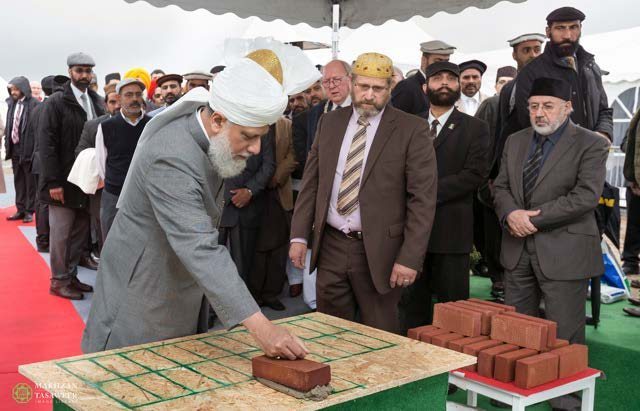 The religious leader said that true Mosques welcomed all peaceful people, regardless of religion or background.

“I should also make it clear that as Mosques are considered to be Houses of Allah they are open to all peace loving people. Our Mosques have no hidden agendas and nor are they built for any secret purposes. Rather, the doors to this, and indeed all true Mosques, will forever be open.” 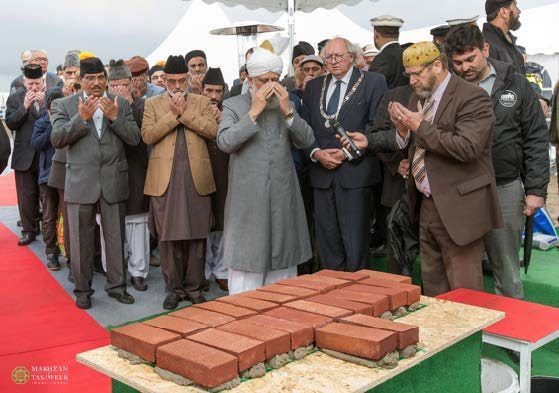 His Holiness concluded by thanking the local authorities and people for supporting the Ahmadiyya Muslim Community’s efforts to build a Mosque in Almere.

“I would like to express my heartfelt gratitude to the local authorities and people for supporting our efforts to build a Mosque here. It is due to your kindness and open-hearts that those people who were previously persecuted and deprived are now able to live with true religious freedom and will soon be able to worship in a new purpose built Mosque, God Willing. The fact that they are able to live in peace is a great testimony to this nation and its people.”