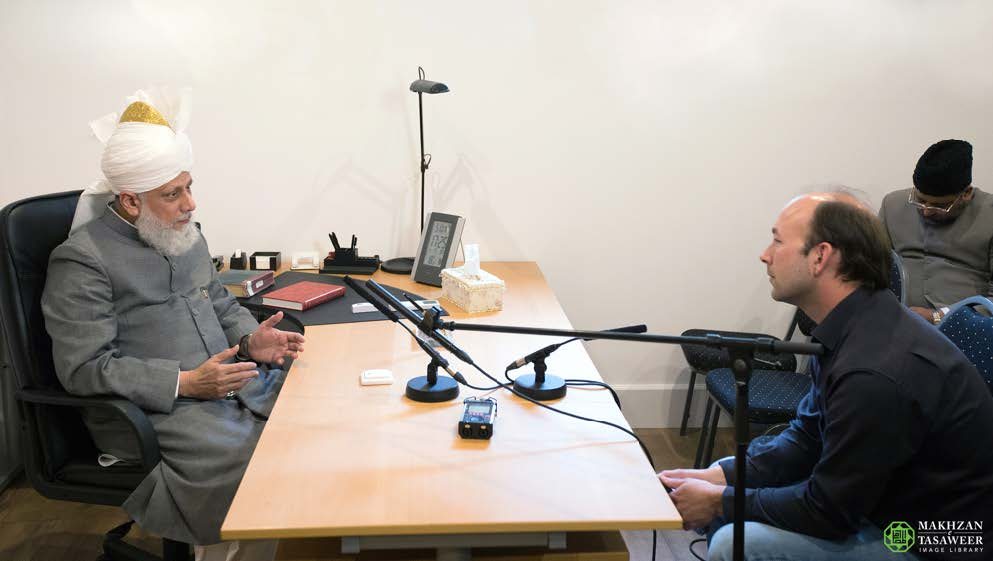 On 5 October 2015, the World Head of the Ahmadiyya Muslim Community, the Fifth Khalifa (Caliph), His Holiness, Hazrat Mirza Masroor Ahmad was interviewed by the Dutch News Agency, Omroep Gelderland.

Asked about changes in the perception of Islam amongst Western society in the 60 years since the Mobarak Mosque in Den Haag (The Hague) was opened, His Holiness said that during the past six decades people had drifted away from religion and this was not limited to Islam.

However, His Holiness said that there was a growing perception that Islam was the root cause of today’s problems and conflicts but that this notion was entirely wrong.

His Holiness said that whilst Muslims had moved away from the true teachings of their faith, the religion in its original form was a means of uniting society, rather than dividing it.

“In reality, the Holy Quran is a beacon of peace and we Ahmadi Muslims are striving to portray Islam’s true teachings throughout the world. Each year hundreds of thousands of people are joining the Ahmadiyya Muslim Community from all parts of the world.”

Asked whether he was fearful of anti-Islamic groups or individuals, Hazrat Mirza Masroor Ahmad said:

“I am not at all fearful of those who are against Islam. Every person has a right to an opinion or viewpoint, however a person does not have the right to claim he understands what another person believes in better than they do. Furthermore, there are now even non-Muslims who are defending Islam. For example, just last week the journalist Ed West wrote a very good article in the Evening Standard about our Community entitled ‘Our own London caliphate is doing nothing but good’.”

Regarding the concept of Jihad, Hazrat Mirza Masroor Ahmad said:

“Muslim extremists are entirely misconstruing the concept of Jihad. In today’s world true Jihad is to spread the peaceful of teachings of Islam, which are of love and compassion. If Islam is being attacked now it is through the media and through literature and so Muslims should defend Islam through the media and by publishing articles explaining the true teachings of the religion.”

Upon being asked if he ever became frustrated upon seeing the deteriorating state of the world, Hazrat Mirza Masroor Ahmad said:

“No matter what, we will always continue in our mission to spread the true teachings of Islam and one day we hope to win the hearts of people through love.”

“I have said for many years that it was a mistake to assume everything in the world was fine after the conclusion of the Cold War. Today we are seeing opposing blocs and alliances forming and so there is a risk of the situation escalating into another world war.”