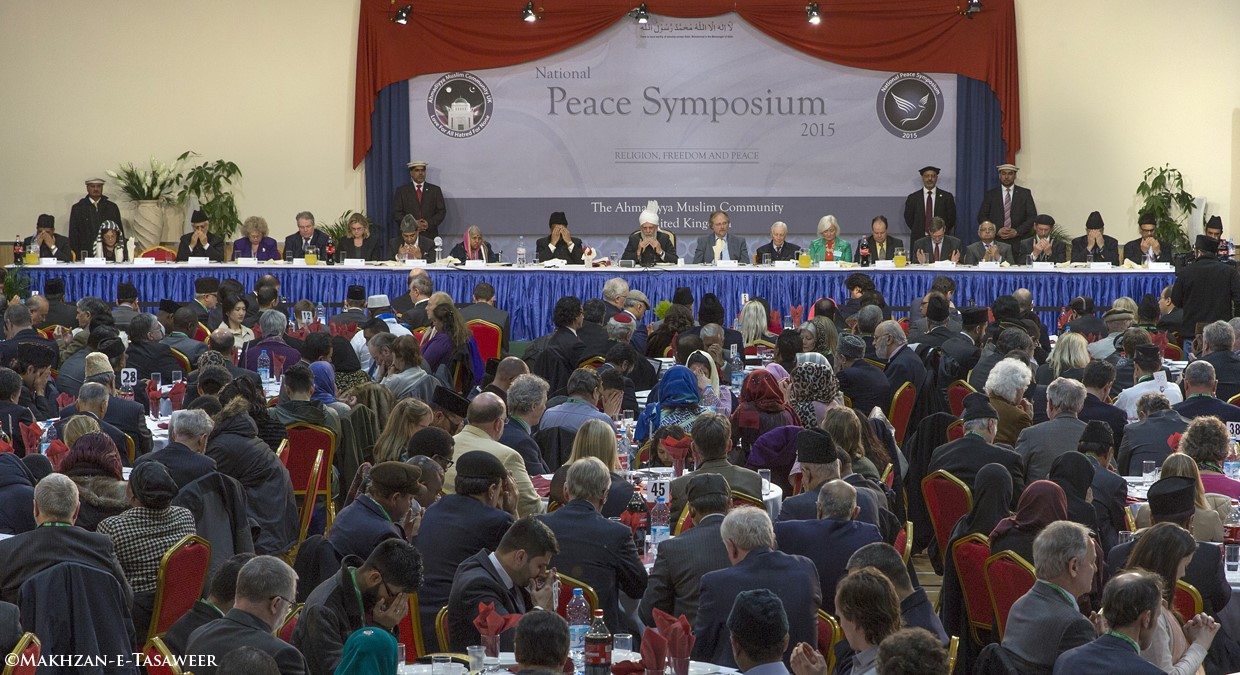 His Holiness categorically condemned terrorist groups such as ISIS, Boko Haram and Al-Shabaab as acting completely against the teachings of Islam and quoted verses of the Holy Quran that refuted all forms of extremism.

The event was held at the Baitul Futuh Mosque in London with an audience of more than 1000 people, including more than 600 non-Ahmadi guests comprising Government Ministers, Ambassadors of State, Members of both Houses of Parliament and various other dignitaries and guests. A special guest this year was Professor Heiner Bielefeldt, the UN Special Rapporteur on Freedom of Religion or Belief. The theme of this year’s Peace Symposium was “Religion, Freedom and Peace”.

During the event, His Holiness also presented Mrs Sindhutai Sapkal, renowned as a ‘mother of orphans’ with the Ahmadiyya Muslim Prize for the Advancement of Peace in recognition of her outstanding efforts to personally alleviate the suffering of more than 1400 orphaned children and providing them with food, shelter and education.

Hazrat Mirza Masroor Ahmad began his keynote address by observing that since the last Peace Symposium, held in November 2014, there had been an international effort to target the funding of terrorism, which gave rise to

“a note of cautious optimism”.

“One point I made at the last Peace Symposium was that the world should urgently target and seek to block the funding and supply line of the terrorist group known as ISIS or I.S. I do not claim that it is because of me, or the fact that I drew attention to this matter, but certainly over the past few months there have been tangible efforts to tackle this crucial issue.”

His Holiness cited a February 2015 UN-Security Council Resolution targeting the funding of terrorist groups and said that if properly implemented it could soon lead to the downfall of ISIS. 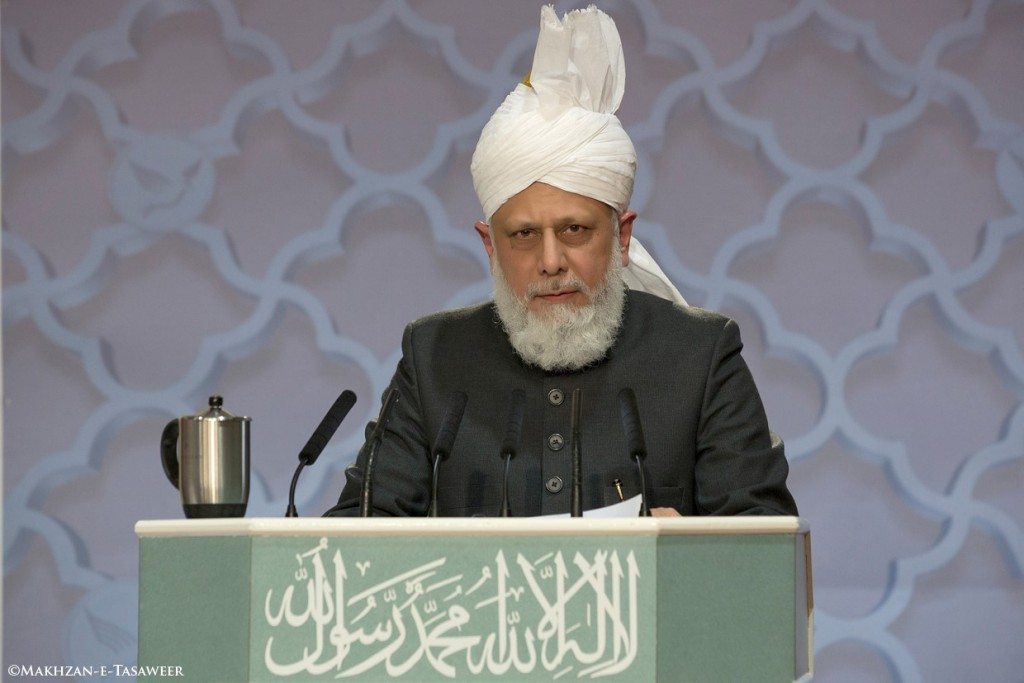 During his address, Hazrat Mirza Masroor Ahmad categorically condemned all forms of terrorism and extremism and deemed the January 2015 terrorist attacks in Paris as

“horrifying and completely against the teachings of Islam”.

“In terms of the reaction of world leaders to terrorism it has been pleasing to see that certain politicians and religious figures have chosen not to add fuel to the fire but have instead made it clear that they do not believe that any terrorist group represents the true teachings of Islam.”

His Holiness specifically praised comments made by President Obama at the National Prayer Breakfast in Washington regarding terrorism and comments made by Pope Francis after the Paris attacks in which he said that people should not provoke others by insulting their faith or beliefs.

Hazrat Mirza Masroor Ahmad spoke of the widespread and increasing conflict prevalent in the world. He cited not only the disorder in certain Muslim countries but also reflected on the increasing division in other parts of the world.

“The world is being consumed by various issues that are leading to frustration and resentment, which in turn are undermining peace. For example, the effects of the financial crisis continue to be felt in much of the world. In Europe, discontent is increasing and the integrity of the European Union is being challenged and undermined. Anti-immigrant or nationalist parties are gaining popularity in many countries. Then there is the conflict in Ukraine and the global arms race. These are all threats to world peace that are not linked to Islam, but rather have developed as a result of an unquenchable thirst for power, influence and resources. “ 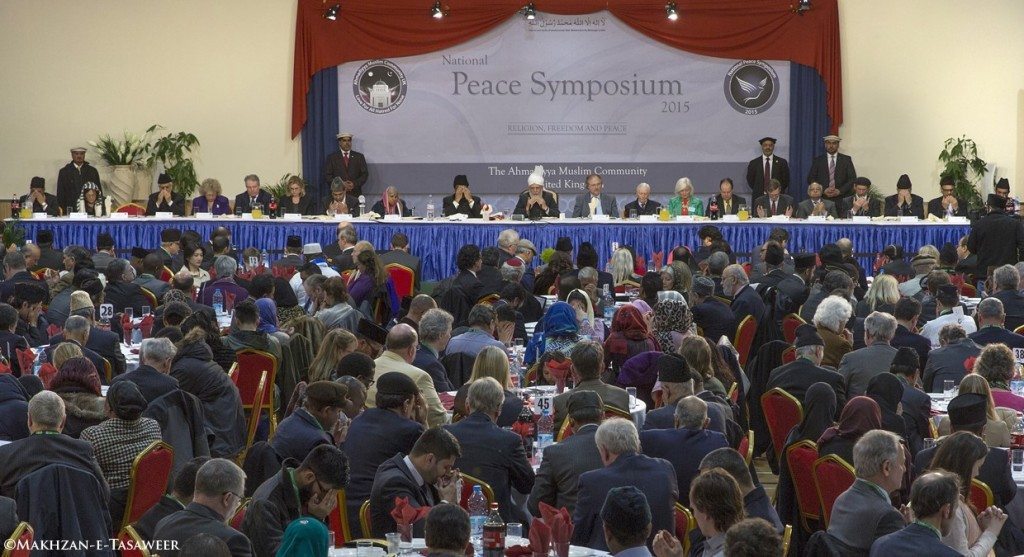 “We should realise and recognise the critical need of the hour. We must accept that peace can only be built upon the solid foundations of honesty, integrity and justice. These are the keys to peace. Until there is honesty and justice no solution will ever prove beneficial. “

His Holiness spoke about the objectives of the Ahmadiyya Muslim Community and its commitment to spreading the true and peaceful teachings of Islam across the world.

“We the Ahmadiyya Muslim Community have no power or worldly influence. Our objectives are purely spiritual and so we do not seek power or government. We have no political ambitions or objectives.”

“As a religious community we desire only that the world comes to recognise its Creator and that people fulfil the rights of one another. To fulfil these twin objectives we make every possible effort in all parts of the world. We seek to inform others that Islam’s teachings have no link with the violence and disorder witnessed in the world.”

The Khalifa went on to give a detailed analysis of Quranic teachings in relation to peace and religious freedom, stating that wherever Muslims were given permission for a ‘defensive war’ it was given as a means to protect all religions and not just Islam.

Reflecting on recent reports that terrorists had destroyed historical monuments and artefacts in ancient Iraqi cities, His Holiness said that such attacks were a clear violation of Quranic teachings.

“For more than 1400 years these cities were preserved and protected by successive Muslim rulers and governments and yet now the extremists claim to have destroyed them in Islam’s name. This can only be branded as an extreme cruelty and a transgression of Islam’s teachings. No true Muslim could ever comprehend acting in this way.”

His Holiness concluded by urging all parties and individuals to play their roles in promoting peace in the world. He said that a Third World War could still be averted if principles of justice and honesty came to the fore at all levels of society.

“Whilst some are saying that another World War is now unavoidable, I believe that even now there is time for the world to wake up to the stark reality it faces and to arrest this threat. To do so, all people and their leaders will need to stop looking only in one direction and caring only for their own interests. Instead, they must seek to fulfil the requirements of justice, fairness and honesty at all levels of society.”

“I hope and pray that may Allah enable all of us to understand and recognise the gravity of our responsibilities and to fulfil our duties.”

Rafiq Hayat, the National President of the Ahmadiyya Muslim Community UK said that terrorists and extremists were

“the polar opposite of what religion stands for”.

Siobhain McDonagh, MP and Chair of the ‘All Party Parliamentary Group for the Ahmadiyya Muslim Community’ said:

“We must all be vigilant in our efforts to protect the right of all people to enjoy true religious freedom.” 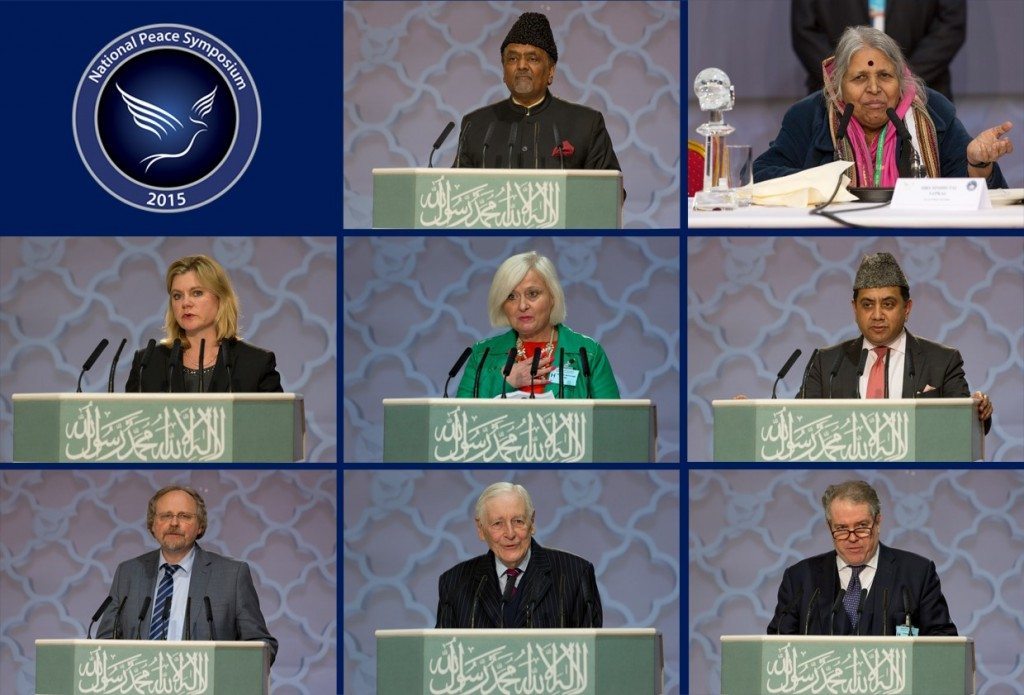 “It is a privilege to attend the Peace Symposium where we have all joined together under the wise leadership of His Holiness, Hazrat Mirza Masroor Ahmad to speak against the forces of hatred and aggression.”

“It is extremely evident how prosperous, charitable and courageous the Ahmadiyya Muslim Community is in the face of the adversity it faces in certain countries.”

Lord Ahmad also read out a message of support sent by Prime Minister, David Cameron praising the Ahmadiyya Muslim Community’s commitment to spreading a message of peace and tolerance.

“His Holiness, Hazrat Mirza Masroor Ahmad is a tireless advocate for peace in a conflict-ridden world… The way the Ahmadi Muslims reach out to the wider community is exemplary and so I place great value on my relationship with the Ahmadiyya Muslim Community.”

“The Ahmadiyya Muslim Community has always made a positive contribution towards promoting religious freedom. Thus in 1948, Muhammad Zafrullah Khan, an Ahmadi Muslim and the first Foreign Minister of Pakistan, took to the podium at the United Nations General-Assembly to fully endorse the principle of religious freedom and the right to change one’s belief.”

The recipient of the Ahmadiyya Muslim Prize for the Advancement of Peace, Mrs Sindhutai Sapkal, spoke of how she overcame childhood poverty in India and that such experiences had motivated her future humanitarian efforts. 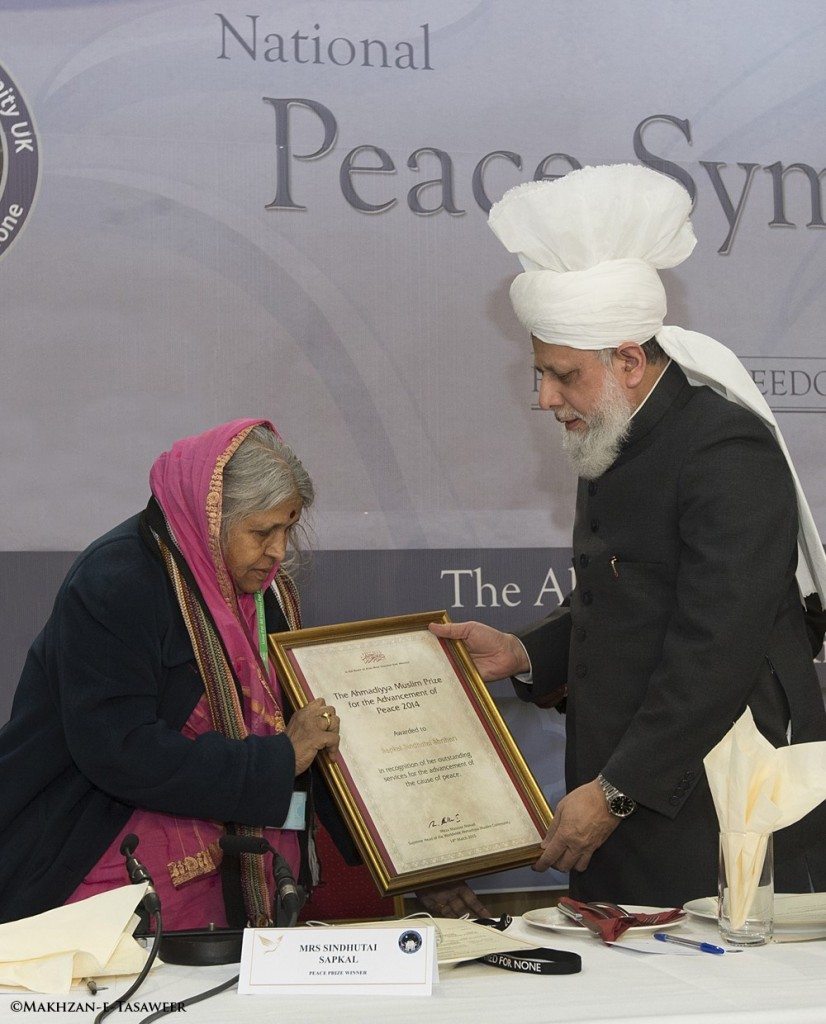 “The difficulties I faced when I was young have enabled me to do something good with my life and so I hope to be remembered as a person who helped those who were in need.”

Both before and after the proceedings, His Holiness met personally with various dignitaries and guests and also met with members of the western and Asian media. 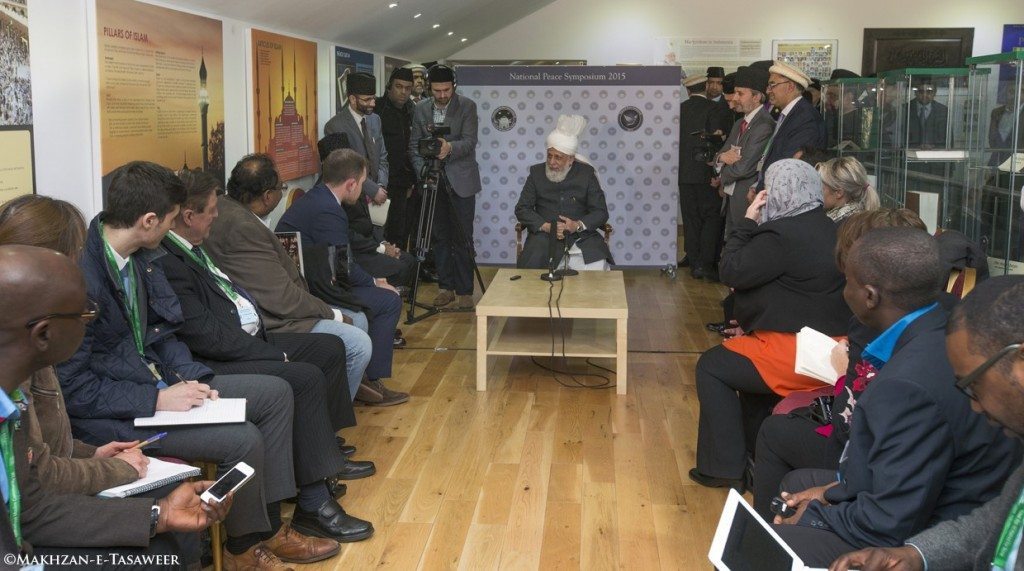 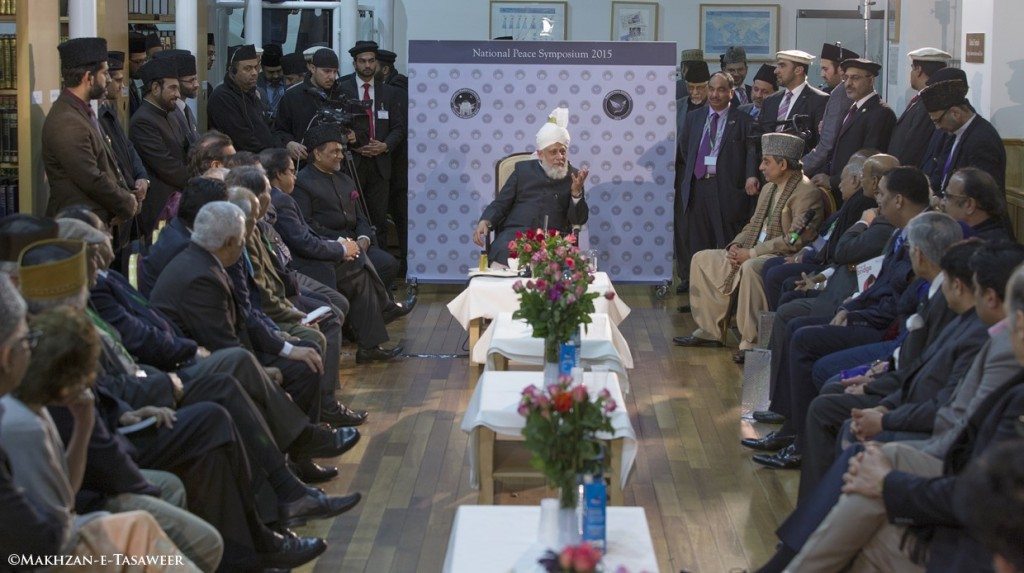