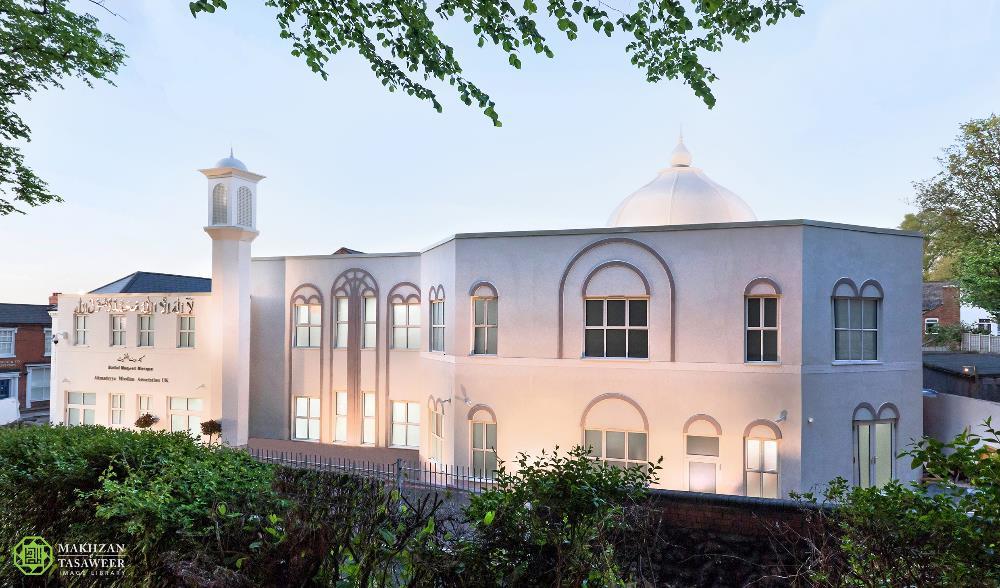 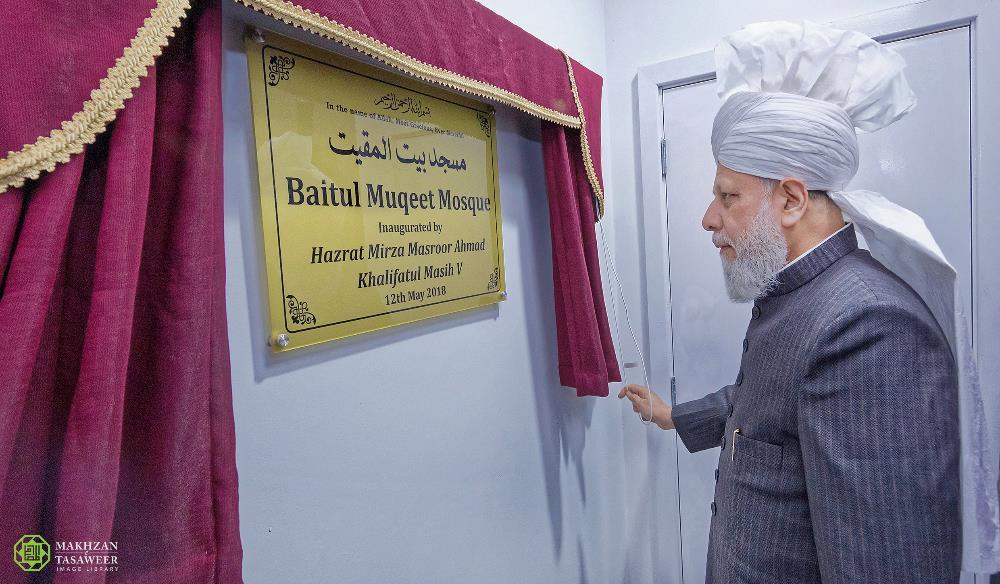 Upon arrival, His Holiness officially inaugurated the Mosque by unveiling a commemorative plaque and offering a silent prayer in thanks to God Almighty. Thereafter, His Holiness led the Asr prayers at the Mosque before addressing the local Ahmadi Muslims.

Later, a special reception, attended by various dignitaries and guests, was held at the Mosque to mark its opening.

The highlight of the event was the keynote address delivered by Hazrat Mirza Masroor Ahmad, during which he categorically stated that Islam rejected all forms of terrorism and extremism. 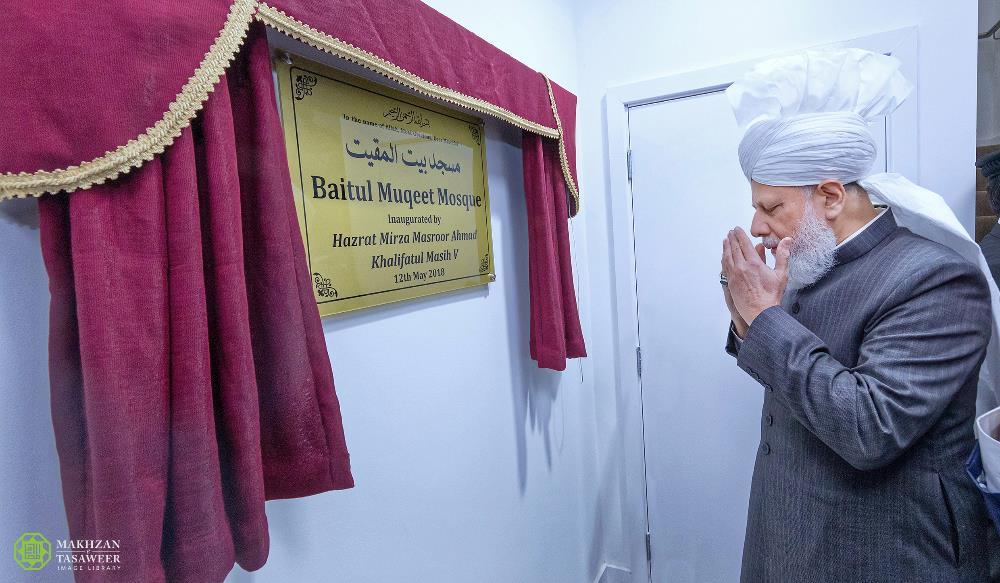 He also praised the

of the local people for permitting the Ahmadiyya Muslim Community to build a Mosque and contrasted such religious freedom with the situation of Ahmadi Muslims in certain other countries, where they are persecuted and unable to practice their faith openly and freely.

His Holiness began by addressing potential concerns of the local people about the opening of the new Mosque.

“Some of you, whether amongst our neighbours or other guests, may feel a degree of trepidation and harbour reservations about this Mosque. You may fear that it will be used to sow seeds of division in society or to inflame tensions between different communities.” 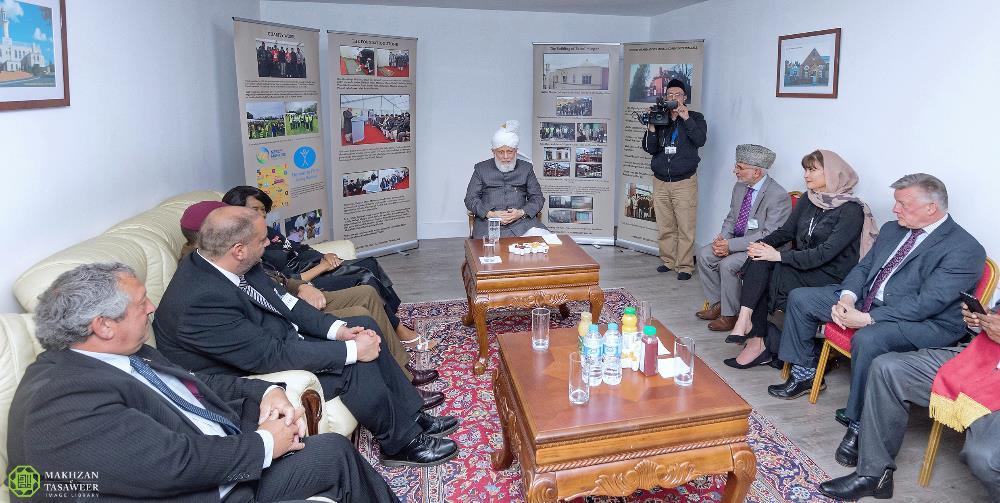 “Certainly, I very much appreciate and understand such concerns because we are all tragically witness to the fact that some so-called Muslims have conducted heinous terrorist acts, both here in the UK and abroad in recent times. Such vile acts have created a climate of fear amongst non-Muslims and, at the same time, have served to defame the religion of Islam.”

His Holiness also mentioned that it had been reported that some Muslim youths had travelled from Walsall to join extremist groups abroad.

“Perhaps, they believed they were going to fight in defence of Islam, but the truth is that whatever cruelties and evil acts they perpetrated were in complete defiance of Islam’s true teachings and proved only their total ignorance of the religion they claimed to represent.”

His Holiness explained that wars fought by Muslims in the time of the Holy Prophet Muhammad (peace be upon him) “were not aggressive or fought to conquer lands” rather were defensive wars that were fought as a last resort to defend the universal principle of “freedom of belief”.

“The Holy Quran has made it crystal clear that it is the duty of Muslims to protect all religions and the people of all beliefs and to preserve the sanctity of all places of worship. It has enshrined freedom of belief as an indispensable and paramount tenet of Islam.”

“If any of you fear that this Mosque will prove to be a centre of extremism filled with cruel and heartless people, let me reassure you at the outset. Our religion seeks to bring people together through love and dialogue and never through force or fear. Islam completely rejects all forms of extremism and terrorism. There is no ambiguity or doubt in this matter.”

His Holiness explained the Holy Quran’s description of Allah as the ‘Lord of all the worlds’, who provides for all Creation. Thus, true Muslims could never inflict any cruelty or injustice towards non-Muslims.

His Holiness also spoke of how Mosques are open to all peaceful people and act as a symbol of inclusion and unity. 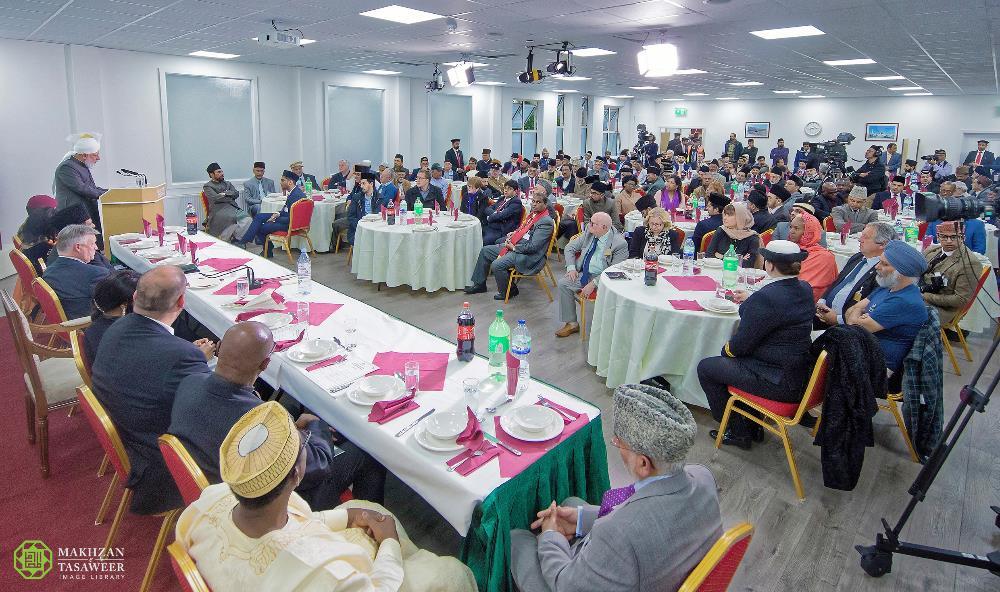 “It is a fundamental Islamic principle that Mosques are open to mankind and Allah the Almighty has decreed that to prevent people from entering a Mosque is a great cruelty and injustice.”

“I reiterate that true Mosques are open to all people for the worship of the One God and so the doors to every Mosque built by the Ahmadiyya Muslim Community, no matter where in the world, are open to the people of all faiths and beliefs.”

Presenting the example of the Holy Prophet of Islam (peace be upon him), Hazrat Mirza Masroor Ahmad said:

“Throughout his life, the Prophet of Islam (peace and blessings be upon him) sought to unite mankind and to build bridges with the people of different communities and beliefs. He sought inter-faith dialogue and was ever mindful of the sentiments of other people.”

His Holiness said that the Holy Prophet Muhammad (peace be upon him) had set “an everlasting example of religious tolerance for all Muslims to follow” when he permitted a Christian delegation from the city of Najran to worship in his own Mosque according to their own customs and beliefs.

Later, His Holiness spoke about how Ahmadi Muslims sought to integrate and positively contribute to the societies in which they lived.

“The history of the Ahmadiyya Muslim Community testifies to the fact that wherever we build a Mosque, the local people soon see for themselves that where Ahmadi Muslims join together to worship, they also gather together to spread peace and to serve their neighbouring communities and the wider society.”

“We consider it a great favour of this town and its people that they have enabled us to build this Mosque… We will never forget this favour and consider it our religious duty to care for the people in this community, to be loyal to this nation and to be ever ready for your service and to offer our help and assistance wherever and whenever it is needed.”

Thereafter, His Holiness said that due to their Islamic faith, Ahmadi Muslims are engaged in humanitarian projects across the world. He mentioned how the Ahmadiyya Muslim Community had established schools and hospitals in Africa and were providing electricity and water in remote and extremely deprived villages. He said that Ahmadi Muslims seek no reward or praise for their efforts.

“Bringing relief to others and alleviating the physical and mental suffering of mankind is our mission and an integral part of our faith… We do not consider that we are doing them a favour, rather by enabling us to fulfil our duties to serve others, they are helping us.”

“This is true Islam. It is a religion of compassion and benevolence and a religion that seeks to knock down the walls of injustice that divide us through the power of love and humanity.”

“With all my heart, I pray that this Mosque proves to be a beacon of light for the entire community and serves as a symbol of unity, togetherness and peace.”

Earlier, various guest speakers took to the stage to congratulate the Ahmadiyya Muslim Community on the opening of the Mosque.

“Today demonstrates our continued inclusivity as a nation. The Ahmadiyya Muslim Community’s motto of ‘Love for All, Hatred for None’ is evident in your every act.”

“I want to take this opportunity to acknowledge your work in promoting peace and exemplary work in helping those less fortunate… You suffer from persecution and intimidation in Pakistan and, in such circumstances, it is tempting to retreat, but the Ahmadiyya Muslim Community continues to practice what it preaches – Love for All, Hatred for None.”

“Ahmadi Muslims speak of kindness and charity and I am very happy you have been able to open this wonderful new Mosque in Walsall. My own view is that belief in God is good for both the individual and for society.”

“The Ahmadiyya Muslim Community is a credit to the people of the West Midlands. I can think of no better people than the local Ahmadi Muslims… I will remember this day for a long time and will forever respect Ahmadi Muslims.” 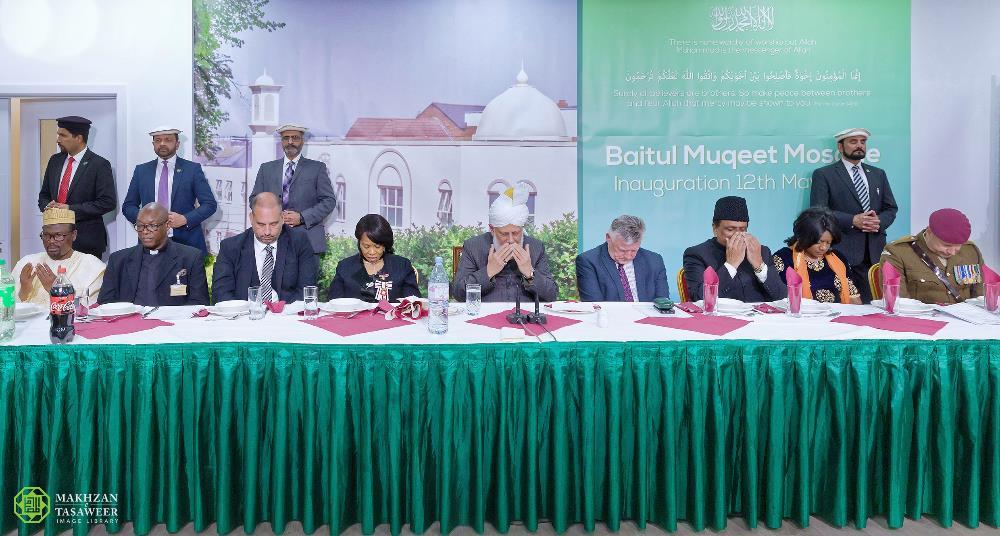 The formal proceedings concluded with a silent prayer led by His Holiness.