“Instead of being the cause of today’s problems, religion is the answer” 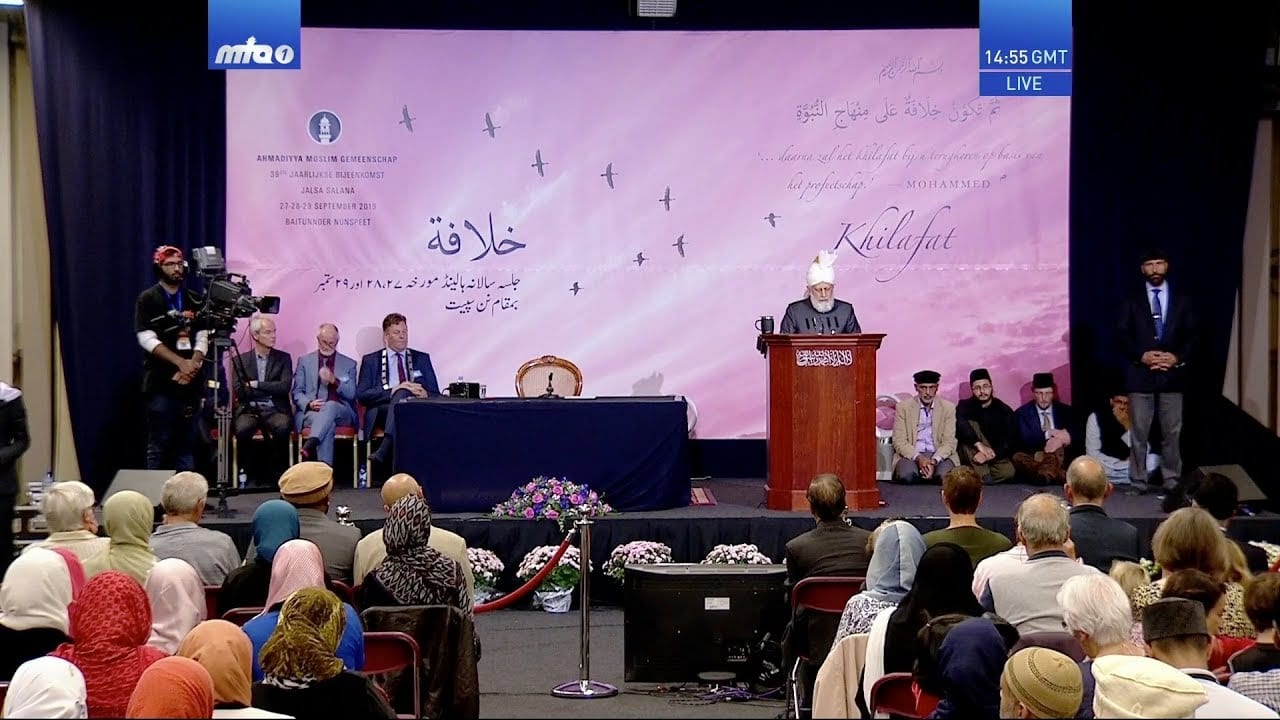 At 14:33 GMT, Hazrat Amirul Momineen, Khalifatul Masih V(aba) arrived in the Jalsa Gah of Holland Jamaat, where external guests had gathered to listened to Huzoor’s(aba) words in a special event organised especially for them.

The formal gathering commenced with the recitation of Surah al-Hujurat, chapter 49, verse 14 followed by its translation.

Three guest speakers were scheduled to speak before Huzoor(aba). The first thanked Huzoor(aba) for being there and for being invited to the event. He praised the Jamaat who have brought a lot of positive change to the local area.

The next speaker who served the international human rights committee investigating the lives of Ahmadis who have fled from Pakistan to Thailand and Malaysia due to religious persecution, presented his findings of this committee. He expressed his firm belief that more should be done by Western countries to help such persecuted people.

The last speaker to talk to the gathering before Huzoor(aba) was the mayor of Nunspeet. The mayor said that he wished to welcome Huzoor(aba) and all those who had gathered in the city. He said that his sentiments were similar to that of the first speaker in that the Jamaat connected people and spread love, something that is much needed in the world.

For the special purpose people had gathered, the mayor asked what our duty was in the world. He said that the answer to this is something that everybody must continue to look into.

After Tashahud and Ta‘awuz, Huzoor(aba) thanked all the guests who had accepted the Jamaat’s invitation to the function.

Huzoor(aba) said that a concerted attempt had been made in recent years to spread hate against Islam and malign the character of Prophet Muhammad(sa), yet despite this happening all over the world, those who had come to attend showed their open-mindedness.

Religion is a personal matter for everyone and no one has the right to think ill of or deride another’s belief. Doing this only leads to further division and inflicting pain to others. Understanding one another is the only true means to peace.

In Holland, for instance, Huzoor(aba) said that certain people had made it a point to raise false accusations against the Holy Prophet(sa) and Islam.

Huzoor(aba) explained that peace is something that different nations and peoples aspire to achieve. However, “What is peace and why do we need it?” Huzoor(aba) asked.

“In my view, there are two types of peace. There is outward peace and inner peace. Often, at a superficial level, people can appear to be happy and content. Yet, though they have outward peace, they remain bereft of inner peace. For example, powerful and influential people often speak about developing peace and they personally possess all the trappings and comforts of the world. Nevertheless, many admit that they remain in search of peace of mind and are consumed by tensions and vexation.

“From a purely external and material point of view, they have all that they need, yet their minds remain plagued by anxiety and their hearts remain unfulfilled. Thus, the reality is that until a person attains inner peace, their material comforts are worthless. Simply put, the one thing money cannot buy is inner peace.

“For example, imagine the case of an affluent mother, who has riches beyond her needs, but her child becomes lost. Despite having every possible worldly comfort, she will remain frantic and desperate, until she finds her child.”

Addressing a common problem being faced in the world today, Huzoor(aba) said:

“Sadly, in both the developed and developing worlds, mental health issues are on the rise. In rich countries, increasing number of people are committing suicide, suffering from breakdowns or depression, even though they are relatively strong in financial status.

“Unsurprisingly, a lack of inner peace is also common amongst the weaker and vulnerable members of society, who cannot fulfil their basic needs and who desperately yearn for the comforts available to others. Thus, frustration and inner turmoil is palpable amongst the rich and the poor.”

Huzoor(aba) then explained that critics blame religion for such mental suffering. Huzoor(aba) explained:

“As a religious leader, I firmly believe that instead of being the cause of today’s problems, religion is the answer and from an Islamic perspective, the solution is quite simple.”

Huzoor(aba) explained that the Holy Prophet(sa) of Islam taught that everyone should seek to find their Creator Who is the Lord of all the worlds. He looks over everyone, irrespective of their religious beliefs or background. Another instruction is that a Muslim should like for his brother what he likes for himself.

The unfortunate truth is that most people do not wish peace and contentment for their opponents and competitors. Huzoor(aba) said that the principle given by Islam’s Prophet(sa) is that if you wish good for yourself, then you should wish good for others also.

Unfortunately, equity and justice are being ignored by many powers of the world and this is reflected through various foreign policies of rich and powerful countries.

Many nations have sent their armies to conflict-ridden countries with the claim of establishing peace, yet the actual purpose behind those missions in the past has been to serve their own agendas and vested interests. This has always led to disaster and frustration.

The world is now so connected that the ramifications of events taking place in a country are bound to exceed the boundaries of that country. Thus, the solution to this is that we should like for others what like for ourselves. We must turn to our Lord and try to emulate His attributes. Our motivation and purpose must be pure.

“Human beings should set aside their personal interests in the pursuit of peace and ensure that their motivations are pure at all times.”

Huzoor(aba) carried on by saying that all government leaders routinely condemn warfare and bloodshed, however the reality is that their opposition to such matters remains focused on the interest of their own people. If they are attacked or their rights are usurped, they talk out, however, they do not partake in fair and honest dialogue when wrongs are done to innocent people around the world.

“They are pouring petrol on an open flame and the result is that innocent people, including women, children and the elderly are losing their lives and observing the torment of their families. Cities, town and villages are being ravaged and torn asunder. The only possible result is an upsurge in frustration and resentment amongst the local people and this is something that has been all too apparent in war-torn Muslim countries in recent years.”

Huzoor(aba) questioned whether the world was doing what they could to stop promoting hate for Islam and its Prophet(sa). Huzoor(aba) clarified that the state of unrest in the world, whether in Muslim or non-Muslim countries, has nothing to do with Islamic teachings. People suggest that Islam is responsible for this unrest, however nothing could be further from the truth. The Prophet(sa) of Islam only taught love for fellow brethren and explained that God is the source of peace.

From the basic family unit all the way to governments, the Prophet(sa) taught to deal peacefully and with justice. A fair-minded review of Islamic history proves that these are completely unjust and false accusations.

After bearing the most unimaginable atrocities, Muslims migrated to a distant land to avoid being persecuted. They travelled to a land that was ruled by a just king, with the hope of living in peace. After the pursuit of the opponents, Muslims continued to declare the unity of God and the importance of dealing with fairness and justice. Despite the opponents’ hatred for the Prophet(sa) and their desire to destroy Islam, they were forced to admit on multiple occasions that the Prophet(sa) and his companions(ra) always taught to remain patient and steadfast in their way through peaceful means.

Huzoor(aba) then further elaborated on the history of early Islam, which is clearly explained in chapter 25, verse 64, wherein Muslims were taught to remain patient and dignified always, even when faced by the ignorant.

On the command of God Almighty, they continued to practice this in an attempt to establish everlasting peace.

Chapter 10, verse 26 shows that Muslims were to only promote peace and harmony and bring people together, as it states:

“And Allah calls to the abode of peace, and guides whom He pleases to the straight path.”

When persecution saw no bounds, Muslims migrated to another land, but even there, opponents pursued them.

Then, in chapter 22, verses 40-41, Muslims were given permission to defend not just Islam, but the institution of religion as a whole. This too came with strict conditions, for instance, to not to attack any religious leader, to avoid cutting down trees, killing children, women and the elderly.

Thus, Muslims have a duty to spread peace and this can only be done through love for others.

“Religion is and always will be a matter of the heart and a personal matter for each individual. The very meaning of the word ‘Islam’ is peace and there are many verse of the Holy Quran that make it categorically clear that Muslims must be peaceful and show love and respect to others.

“We proudly proclaim to be the followers of that Noble Prophet(sa) who the Holy Quran declared, ‘A mercy for mankind’. This is the reason that the Ahmadiyya Muslim Community raises the slogan of ‘Love for all and hatred for none’.

“At this time of strife and division, our message is that all nations and all people must urgently strive for peace. The fierce critics of Islam should recognise that instead of targeting their bile and venom towards Islam and its Noble Prophet, peace and blessings of Allah be upon him, they should eradicate the traces of bias, prejudice and self-interest, otherwise disorder and hatred in the world will continue to escalate. Frustration and anger among those Muslims who are uneducated or ignorant of the true teachings of their religion will rise to the surface.

“Not only amongst the Muslim community, but across society, wherever young people are left hopeless and frustrated, they become easy prey for hateful clerics or extremists who poison their minds. We must guard against this, otherwise the bitter cycle of hatred that has darkened the modern world will continue to turn. Peace within Muslim societies and in the wider world will become an ever more distant dream.”

Huzoor(aba) then invited all to join hands to develop a more promising future for the world and our coming generations.

Thereafter, Huzoor(aba) led everyone in silent prayer and departed the hall.