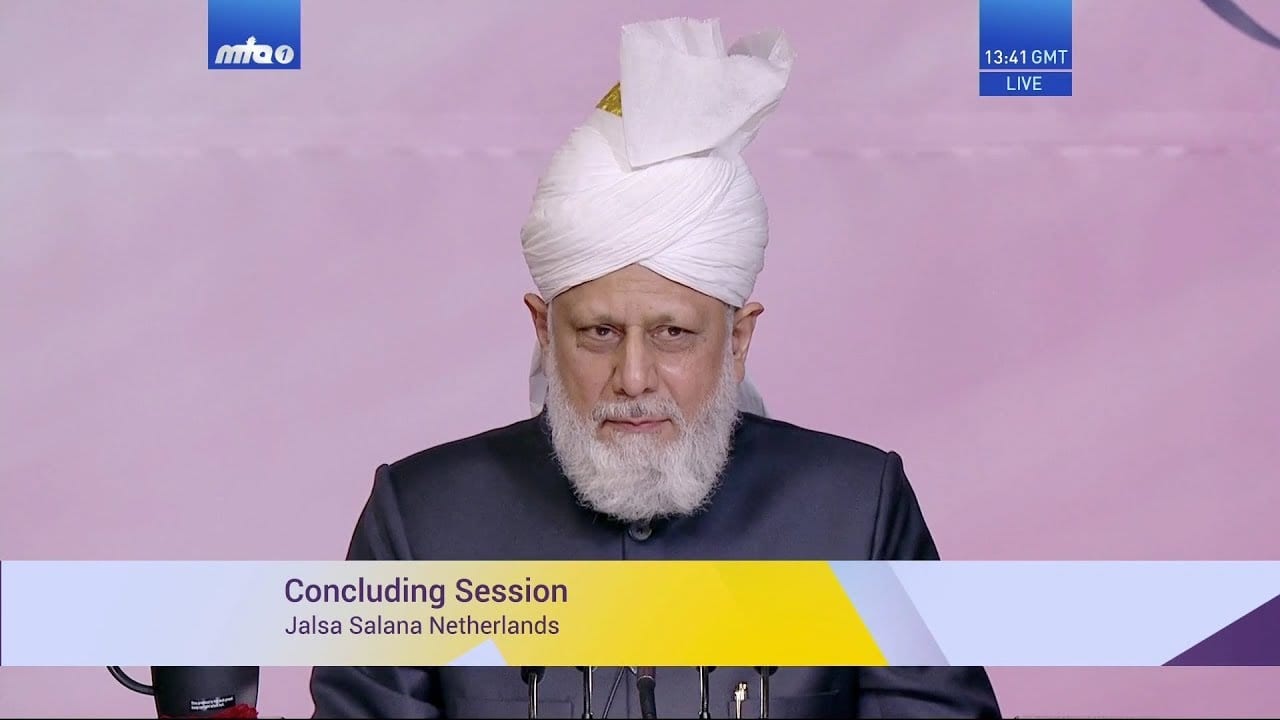 Nunspeet, the Netherlands, Sunday, 29 September. Hazrat Khalifatul Masih V, may Allah be his Helper, presided over the concluding session of Jalsa Salana Holland, at 1:21 GMT.

The formal session started with the recitation of the Holy Quran by Dr Eman Odeh Sahib, chapter 23, verses 1 to 12. Saeed Ahmad Jatt Sahib read out the Urdu translation of the Quranic verses. The verses described the qualities of those believers who will be successful.

Next, an Urdu poem written by the Promised Messiah, peace be upon him, was read by Hammad Abassi Sahib read.

The Promised Messiah(as) had announced that Islam would flourish and spread with his advent. He further stated that people claim that Islam will never be successful and be destroyed, they try to blow the light of Allah out. However, they will not be successful.

The mission that Allah desires to complete can never be stopped by any opposition. They cannot divert the decree of Allah. Huzoor(aba) said that it is Allah’s promise that he will stop all those who oppose Islam and the mission of the Promised Messiah(as).

The Promised Messiah(as) said that opponents tried and desired to extinguish this light of Allah. However, Allah had promised in the Holy Quran that they will not be able to do so.

Those who were and of good nature, through the blessings of Allah, continue to accept the Promised Messiahas.

Ahmadis have the greatest belief that the Holy Prophet(sa) is the last law-bearing prophet and none can come after him.

Hazrat Amirul Momineen(aba) said that he would relate incidents that show how Allah guided people to Islam Ahmadiyyat and caused opponents to fail.

The Promised Messiah(as) said that those who have a pure nature come towards him like metal is attracted to a magnet. However those who have an abhorrent nature do not accept and continue to grow in opposition. Such people will never receive any benefit.

The Promised Messiahas said that those people are blessed who worry about their faith, protect themselves, think positively and seek the truth. He said that it is not difficult to find out if one is truthful.

The first incident Hazrat Amirul Momineen(aba) narrated was of an Ahmadi from Mali. He narrates that he heard the Jamaat’s radio and also the speech of those who were against Ahmadis, and he prayed for guidance. After this, he saw a saint in a dream who said everyone shall accept Ahmadiyyat, whether now or later.

Then another 80 year-old man from Mali who was Muslim, after seeing the so-called scholars, left Islam and indulged in idolatry. He built a house that was full of idols. Some time later, he saw in dream that a man was carrying out tabligh about the Imam Mahdi. After this dream he began listening to the Jamaat’s radio and his love for Islam rekindled. He ultimately accepted Islam Ahmadiyyat after research. His house of Idols also broke down which he saw as a sign from Allah.

A Sadr Lajna from an area within Ivory Coast is a pious lady. She says that her husband was staunch against the Jamaat, yet he would say that his wife transformed for the better after accepting Ahmadiyyat. The lady began praying for him. The husband narrated a dream that caused him to research about Ahmadiyyat. When he decided to accept Ahmadiyyat, he saw another dream in which the local missionary was resetting his room and then came out and said to him that now because you are changing yourself, everything needed to be changed. The gentleman says that, in the dream, when he entered the room everything was new and full of light. After this he accepted Ahmadiyyat and did Bai‘at.

The missionary from Senegal writes about the story of a lady. When this lady heard the message of the Jamaat on the radio she went to the Jamaat’s mission and said that she wanted to accept Ahmadiyyat. With this, she also said that though her husband opposed this decision of hers, she would still accept Ahmadiyyat with all her children. Huzoor(aba) said that she entered Ahmadiyyat and also is an active in paying Chanda.

A household accepted Ahmadiyyat in Benin after tabligh in their area. The head of that household, after listening to the message of Ahmadiyyat, said that he wanted to accept Islam Ahmadiyyat along with his household. He then sent two of his children to the Jamaat’s mission house to learn the Holy Quran. Now, within a year, his elder son can read the Holy Quran and is very active within the Jamaat. He even desires to enter Jamia Ahmiadyya.

A lady in Mexico attended a Jamaat book stall. After seeing the book stall she said that she especially prayed to be guided. As a result, she accepted Islam Ahmadiyyat. A very special element of her is that she has an immense love for the Holy Quran and calls it her “treasure”. She said that “she could not live without reading the Holy Quran”.

A gentleman from Benin contacted the Jamaat. When he went to the missionary, after having his questions answered, accepted Ahmadiyyat. He later said that the truthfulness of the Jamaat was manifested upon him like that of day.

An imam from Ivory Coast, after seeing a series of dreams, accepted Ahmadiyyat.

A gentleman from Nigeria stated that he would enter various Muslim sects but would leave after seeing their dire state. He was pleased to see the teachings presented on MTA International but was still hesitant. Nevertheless, he began to watch Huzoor’saa sermons and started to pray for guidance. His desire to watch the sermons grew and ultimately he realised that Jamaat-e-Ahmadiyya was the truth, so he accepted it.

A gentleman from Mali relates that he had never heard about Ahmadiyyat in his life. He once heard the radio of the Jamaat when passing a shop and found everything he was hearing very interesting and promising. He took permission from the shop owner to listen to the radio at his shop later. For the next five days he consciously listened to the radio and ultimately accepted Islam.

At a book fair in India a gentleman approached the Jamaat bookstall. After some discussion, it seemed that the gentleman knew a lot about Ahmadiyyat. The missionary says that the gentleman said that he would watch MTA a lot. He was convinced of the truthfulness of the Jamaat through the videos of Hazrat Khalifatul Masih IV(rh) that were broadcast on MTA. The gentleman desired to meet an Ahmadi Muslim to profess his belief and was now able to at the book fair.

Khadija Sahiba, a lady from Belize was the first lady to perform Bai‘at in Belize. The missionary in Belize states that many others accepted the Jamaat after seeing her. Once she had an accident with another lady whose name was Carla Sahiba. Khadija Sahiba did tabligh to her and invited her to Jalsa Salana. Carla Sahiba later performed Bai‘at as well. Upon being asked as to why she did Bai‘at, Carla Sahiba said that she knew about the Jamaat prior and was convinced of its truth. She had also desired to meet an Ahmadi. She said that the accident was a sign for her as it enabled her to meet an Ahmadi. Thus, she also performed Bai‘at.

Amir Sahib Gambia writes that by the grace of Allah, the Jamaat was able to build a mosque in a district within Gambia. Neighboring non-Ahmadi scholars would come to the mosque and try to scare those who attended the Mosque, saying that Ahmadis are non-Muslim and if any of them die they will not be allowed to be buried. An uneducated lady confronted the scholars and said “do Ahmadis not recite Surah al-Fatihah in this mosque?” She told them to do what they wanted because they would stay firm on Ahmadiyyat, no matter what. In this way the non-Ahmadi scholars went away.

A gentleman from Benin accepted Ahmadiyyat when he was very poor. The local scholars opposed him a great deal. Nevertheless, he would always give Chanda, whether little or more. Now, he narrates, that he has been blessed manifold in his sustenance and also owns a motorcycle. This was because he accepted Islam Ahmadiyyat.

Jamaat-e-Ahmadiyya did tabligh to a village in Liberia. After the tabligh, the Imam of the village said that a few months prior some scholars came to their village and claimed that it was Ahmadis who killed Imam Hassan and Hussain. The local Imam expressed his regret that they listened to those scholars and stayed away from Ahmadiyyat. However, now, after listening to the truth, the Imam said that they would accept Ahmadiyyat as it was the truth.

Hazrat Amirul Momineenaa then quoted the Promised Messiahas, who said that Allah sends down angels along prophets, who support him. The Promised Messiahas further said that the time will certainly come when Allah will manifest the truth. However, at that time, forgiveness will not be accepted.

Huzoor said that the Jamaat would flourish, prosper and spread; this is a decree of God that shall come to be.

Hazrat Amirul Momineenaa stated that every Ahmadi should focus on tabligh, as a result, gaining the blessings of Allah.

The total attendance of Jalsa Salana Holland amounted to 5839 attendees. 1576 were from Jamaat-e-Ahmadiyya Holland.

Huzoor(aba) then lead the congregation in silent prayer. This was followed by choral poems recited by various groups.