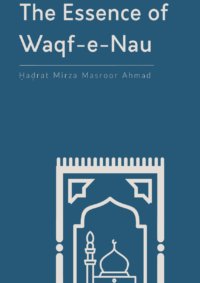 Thirty-one years after the Waqf-e-Nau initiative was launched, there are now over 61,000 Waqf-e-Nau in the world. In the hopes that they will serve the Community in various capacities, these young devotees are placed into the initiative by their parents. Yet, despite having a large number of children enrolled in the initiative, many are unaware of the true significance of being Waqf-e-Nau. The Essence of Waqf-e-Nau is a translation of a Friday Sermon delivered by the worldwide head of the Ahmadiyya Muslim Community, Hazrat Mirza Masroor Ahmad(at) on October 28th, 2016.

In this sermon, His Holiness espouses the true essence of the Waqf-e-Nau initiative. The purpose is to raise children to be devotees of the Community, those who are willing to lay down their lives and spiritually attain lofty heights, just as the companions of the Holy Prophet Muhammad(sa) had done. Having a Waqf-e-Nau child does not deem any merit on its own. His Holiness stresses the point that these children are not special just by being Waqf-e-Nau. Rather, they will be seen as special by Allah only if they uphold their responsibilities and become true, ardent servants of Allah. Just as Hazrat Maryam(as) devoted her unborn child in the way of God, it is the parent’s duty to raise their children with the proper intention and sincerity.