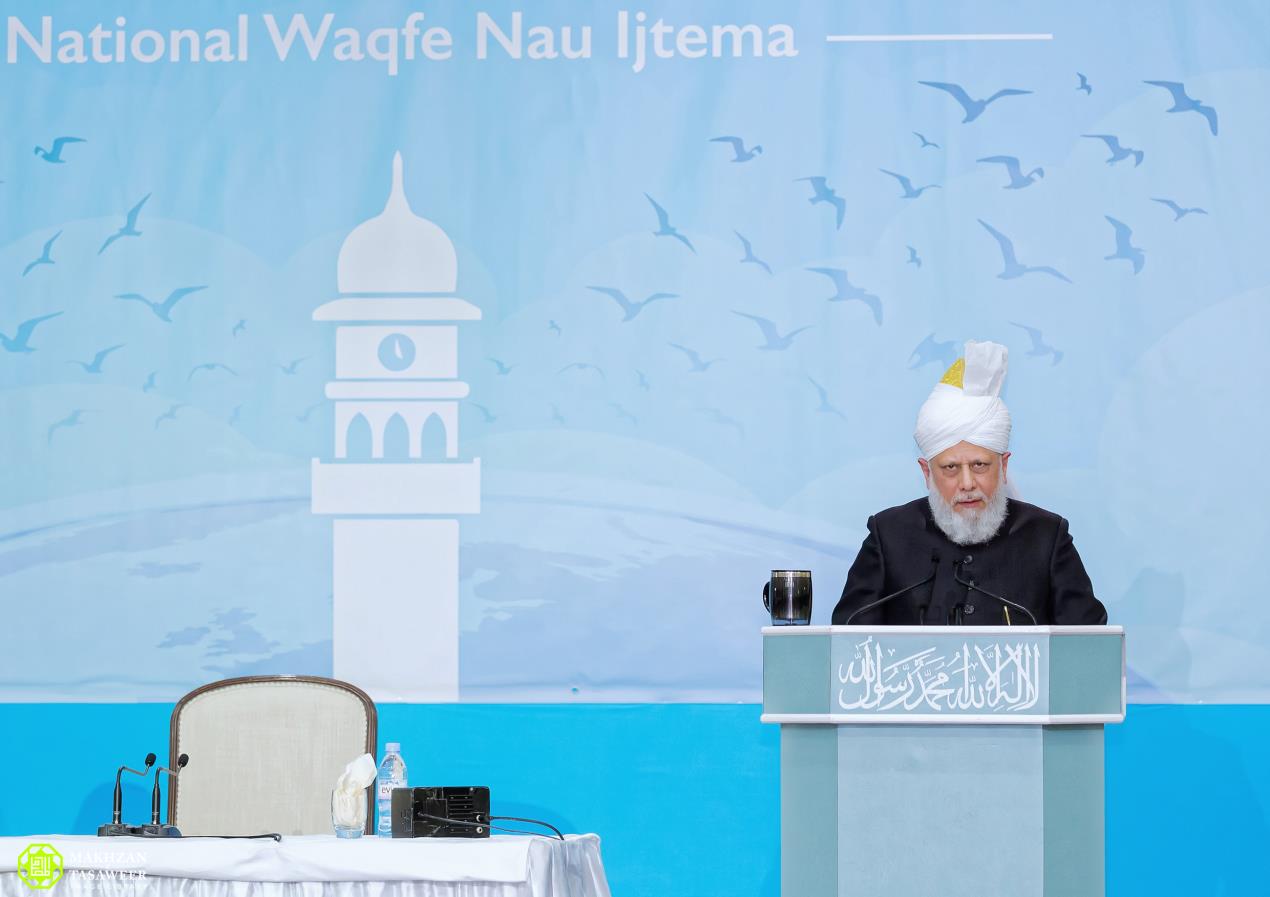 “Rather than being a restriction, Hijab is actually a supreme right” – Hazrat Mirza Masroor Ahmad 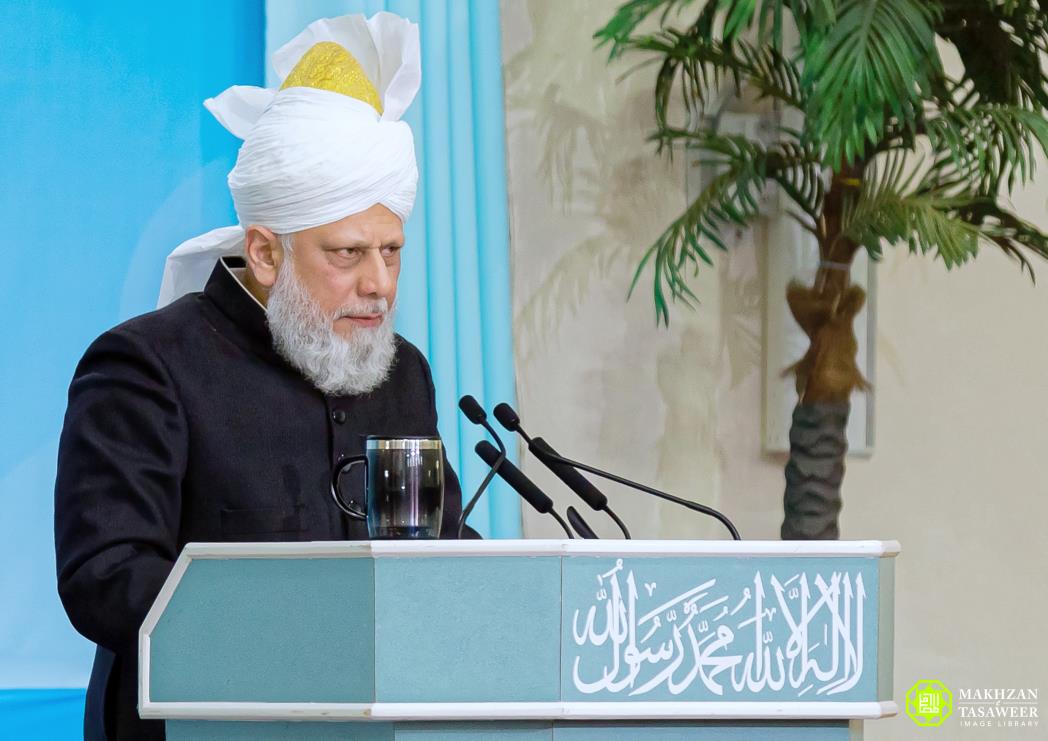 The event took place at the Baitul Futuh Mosque in London and was attended by more than 1600 women and girls, including over 1,200 members of the Waqf-e-Nau scheme above the age of 7.

During an inspirational address, His Holiness spoke of the very high status of women according to Islamic teachings and described them as ‘nation builders’.

“Take pride in the fact that your primary duty is to raise the standards of the future generations by setting the very highest standards for them to learn from and follow…This is a great responsibility and challenge for all of you because you are the ones who can facilitate and unlock the doors to a spiritual revolution in society.”

His Holiness said that growing up in the Western world, Ahmadi Muslims should remember that the teachings of Islam were timeless and universal.

“By all means, adopt those things that are good in society, but never forget that our true guiding light is, and always will, be the Holy Quran, and that our true role model is Holy Prophet of Islam (peace be upon him). Rather than following the superficial glamour of the world or being influenced by modern trends that come and go, we must follow and heed the everlasting and timeless teachings of the Holy Quran.”

His Holiness noted that those nations considered to be extremely modern and developed are seen to be championing the rights of women, yet the fact that they failed to provide women with any rights whatsoever until modern times is often overlooked.

“When the men of these (non-Muslim) nations finally chose to grant some rights to women it was done more to show that they were in favour of equality, whereas the truth was that their slogans in favour of women were often hollow and insincere. Any rights granted to women in recent times have been the result of necessity, rather than any deep desire for progress and also as a means for the men to fulfil their own selfish desires. This is something that history has proven time and time again.”

Highlighting the privilege of Muslim women not needing to be handed their rights by men, in comparison to non-Muslim women who had to campaign and seek their rights from men, Hazrat Mirza Masroor Ahmad said:

“Ahmadi Muslim women should ask themselves that, who are men to bestow rights upon them, when their Creator, Allah the Almighty has Himself bestowed upon them all that they need and desire? They should understand that Allah has granted them true equality based on logic and wisdom.”

Elaborating upon the high status of women in Islam, His Holiness explained that historically some other religions had made false and disparaging claims regarding women, such as the assertion that women did not possess a soul, were born sinners, or even that they were the root of evil.

“Islamic teachings are crystal clear that women are not inferior to men in any way whatsoever. Thus, where the Holy Quran mentions ‘believing men’ it also mentions ‘believing women’. This is true equality… When we compare and contrast the status bestowed upon women in Islam compared to other religions, it is like night and day.”

His Holiness quoted many examples of the rights that Islam granted to women more than 1400 years ago, such as the right to education and the right to inheritance. Whilst it was often claimed that Islam denied women their rights, His Holiness stated that those who made such claims had only afforded women such rights in modern times.

His Holiness also categorically condemned any form of forced marriage and deemed the use of any form of coercion to force consent as entirely opposed to Islam’s teachings.

“When it comes to marriage, it is essential that the bride consents freely and happily without any form of coercion or pressure. Forced marriage is completely wrong and a grave violation of Islamic teaching.”

Highlighting the need for Muslims to understand the teachings of Islam, Hazrat Mirza Masroor Ahmad said:

“If you know your faith, you will soon realise that Muslim women are the most fortunate people, because their rights and their status have been established and eternally protected by Allah the Almighty and His noble Prophet (peace be upon him).”

His Holiness said that Waqfat-e-Nau girls should play a leading role in becoming role models for other girls and become “the standard bearers for Islam and for women’s rights in this era.”

“You will be the ones who lead others towards genuine progress and development, rather than simply following the crowd towards meaningless material pursuits.”

His Holiness also responded to those who criticised Islamic teachings of the segregation of men and women.

His Holiness referred to the ever-widening scandal of sexual abuse or harassment of women that had inspired the #MeToo campaign. His Holiness also spoke about how authorities in Berlin were forced to erect a separate ‘safe zone’ for women at New Year’s celebrations, whilst ‘women-only’ concerts had been proposed in another European country.

“Men have sought opportunities to take advantage of women and to mentally or physically abuse them, and in some cases, it escalated to what can only be termed as torture… The question is why were women abused across the world? The answer, whether they like it or not, is the free-mixing that took place which meant that the women were unable to safeguard themselves.”

In light of all this and the fact that allegations continue to be made against the teachings of Islam, His Holiness said that Waqfate Nau should be

the effort to explain the beauty of Islam

“without any fear or complex”.

“You should openly proclaim the fact that you take pride in your modest dress, in your Hijab and in keeping a distance from men. You should openly declare that these are the essential safeguards that Allah the Almighty has chosen in order to protect women and so rather than being a restriction, Hijab is actually a supreme right and protection afforded to Muslim women.”

Concluding his address, His Holiness emphasised the need the community faces for doctors and teachers. He called on Waqfat-e-Nau girls to train in these fields in order to help run the various humanitarian schools and hospitals the Ahmadiyya Muslim Community has established around the world.

“I pray that you are the shining stars who leave a spiritual trail behind for others to follow and learn from.” 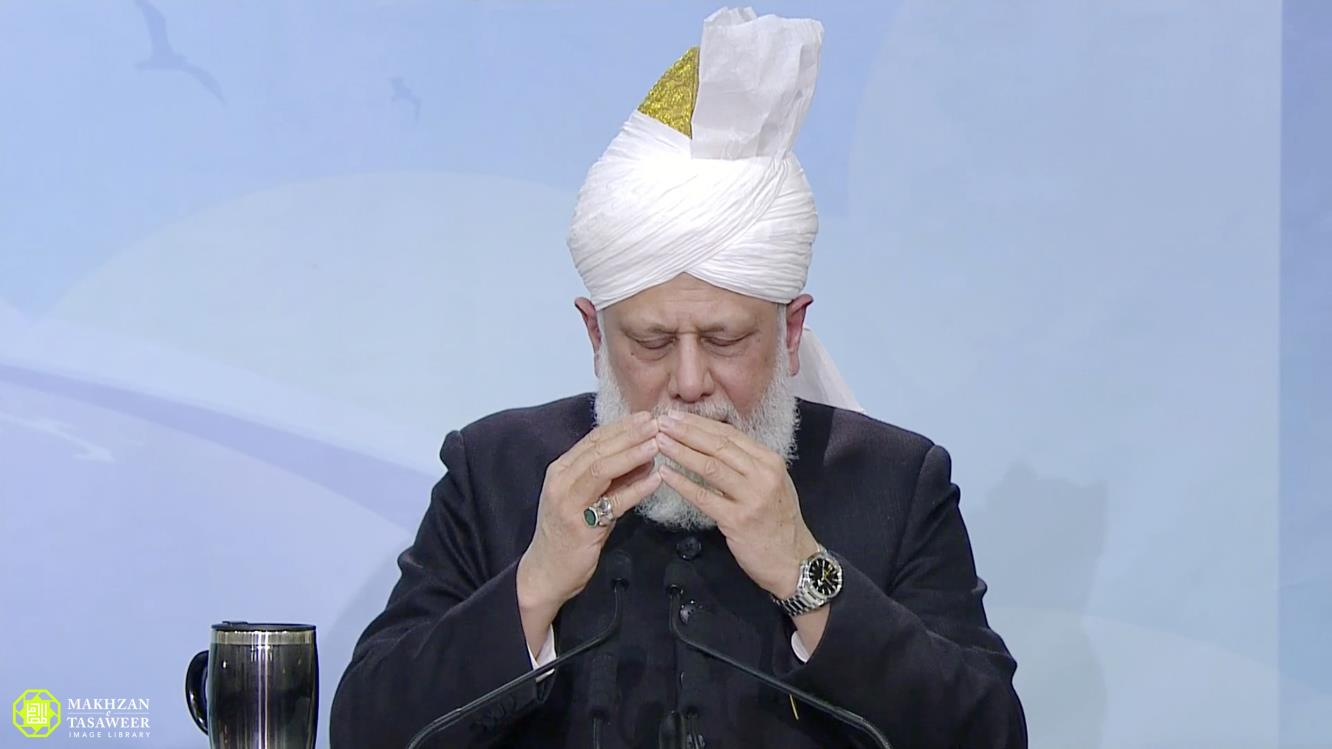 During the day a number of workshops were run for the girls to increase them in their religious and secular knowledge, including workshops by women from the Ahmadiyya Medical Association and Students Association.