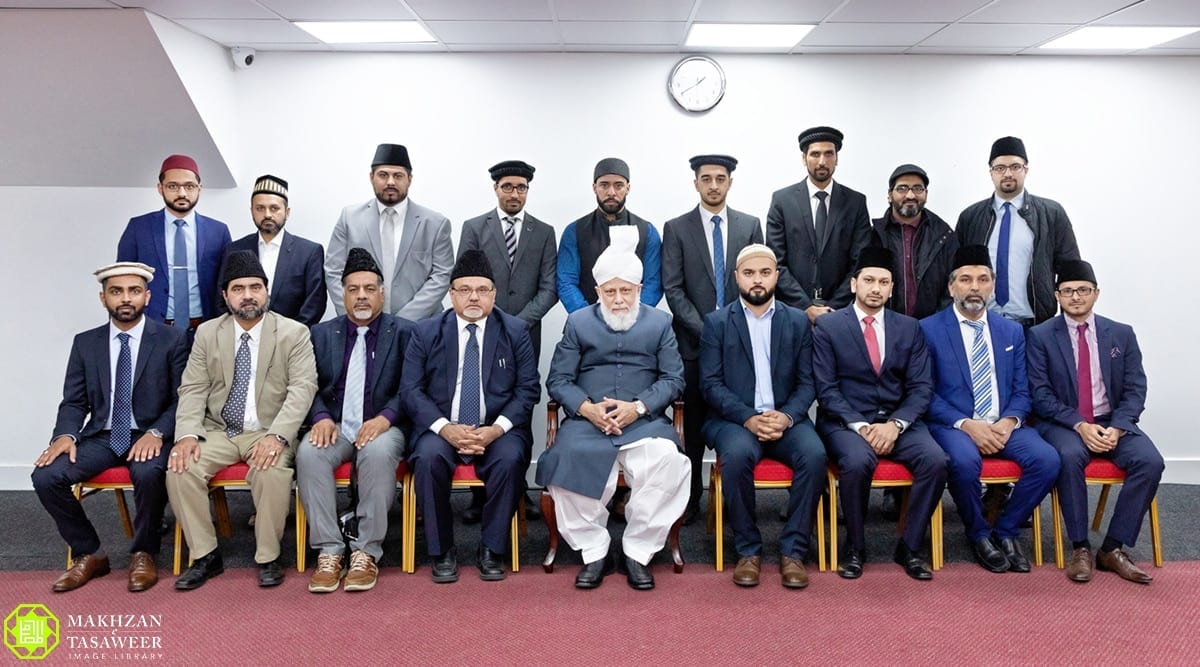 Germany Jamaat’s national tabligh team had an audience with Hazrat Khalifatul Masih V(aba) on 13 April 2019. They sought guidance on various matters and Huzoor(aba) very graciously answered their questions in about an hour-long audience in the Mahmood Hall, Fazl Mosque, London.

A member asked if it is good to always present their contacts the book World Crisis and the Pathway to Peace. Huzoor(aba) replied that it is always best to first determine the aptitude of the person that you have come in contact with before selecting what type of literature would be of interest to them. Huzoor(aba) mentioned how he himself first gets to know the other person’s interests before he hands them literature about the Jamaat.

Abdul Hafeez Bharwana Sahib, a missionary from Germany, conveyed to Huzoor(aba) the Salaam of German Arab Ahmadis. He then asked Huzoor(aba) how more non-Ahmadi Arabs could be invited to Ahmadiyyat. Huzoor(aba) said that all one can do is convey to them the message of the Promised Messiah(as) and his teachings and then leave it to Allah. We cannot and should not force them to accept the message and it is only Allah who can bring about a change of heart.

Munir Ahmad Munawar Sahib, another missionary from Germany, enquired about the conflict between the Kurds and the Turks living in Germany. Huzoor(aba) explained that it is our duty to bring the Muslim world to become an “Ummat-e-Wahida”—a nation united as one.

A member from the Germany tabligh team informed Huzoor(aba) that the German people raise many allegations against the religion of Islam. Huzoor(aba) said that most of the allegations these days are not from religious circles but are atheistic in nature. Atheists take great pride in alleging the Quran of not being adequate for answering modern-day questions and being too harsh on certain matters of the so-called modernity. Huzoor(aba) said that such people need to be told that Islam has been sent by Allah to reform people and not to justify modern day desires. When reformation is to be attained, it has to be through certain restrictions. It is these restrictions on impulsive desires that the world has come to see as harsh and this is what needs to be explained to them. Religion aims at changing people, not people changing it to fit their personal, impulsive desires.

A member had been facing difficulty explaining taqdir (divine decree) to non-believing Westerners. Huzoor(aba) instructed that it does not have to be the first issue to be raised with them, and if it happens to come under discussion, then they should be told about the many prophecies mentioned in the Holy Quran that have come true after hundreds of years. Through this, one can draw their attention towards the Omniscient Being Who knows about our destiny.

Huzoor(aba) reminded the gentleman, and the whole tabligh team, that they should themselves have a living connection with Allah the Almighty before calling anyone to Him; without the former, the latter is not possible. Huzoor(aba) said that if those doing tabligh are actively in connection with Allah, they can cite their own experiences of acceptance of prayers; even challenging them to see whose prayers are accepted more.

A member showed concern on the growing right-wing tendency in the general public of European countries. He wanted to know what role an Ahmadi could play. Hazrat Amirul Momineen(aba) said that people should be told about the tolerant teachings of Islam. When we notice that they see Islam as an intolerant religion, we can call their attention to the reform that has taken place through the reformer of the age, Hazrat Mirza Ghulam Ahmad(as), the Promised Messiah. So they need to be told that Islam has gone through reformation and that Muslims have been reminded by the founder of the Ahmadiyya Jamaat that coercion and violence are actually alien to Islam.

A member of the team requested Huzoor(aba) for prayers that the efforts of the German tabligh team be fruitful. Huzoor(aba) said:

Some members had experienced that the mention of Chanda (the Jamaat’s financial donations) repels some people from accepting Ahmadiyyat. Huzoor(aba) explained to them that he has already set a three-year settling-in period for new members that join the Jamaat. Huzoor(aba) said that this settling-in period was due to the fact that a person needs to first integrate fully into the system of the Jamaat, learn about the teachings, know about what the Jamaat is doing in terms of propagating Islam to the whole world and then feel the urge to donate towards the mission of the Jamaat. Huzoor(aba) said that this desire to spend in the way of Allah should come from within rather than being imposed.

Huzoor(aba) went on to say that the Holy Quran also asks for one to believe in the unseen (ghayb) before anything else i.e. Allah and His divine system. Then comes the injunction of Salat and then, finally, the instruction to spend in the way of Allah

Huzoor(aba) instructed that the same order should be followed when taking new members on board.

“What can an Ahmadi do in terms of international conflicts?”

asked a member of the team. Huzoor(aba) said that on an individual level, we can convey the message of Islam in terms of conflicts – stop the oppressor, help the oppressed recover from the tyranny and then let them live in freedom where they can freely exercise their potential to get back on track and progress.

A member of the team asked Huzoor(aba) to suggest a particular prayer to improve tabligh efforts. Huzoor(aba) said that the Holy Prophet’s(sa) prayers have been recorded in Hadith and they have been put together in books. So, we have the Holy Prophet’s(sa) prayers that he offered on various occasions in various situations and we can always refer to them and offer them in our own prayers. Huzoor(aba) said that the Promised Messiah(as) encouraged us to pray in one’s own language as that helps blend one’s own passion with the supplications, hence increasing the chance of their acceptance.

The meeting ended with a group photo with Hazrat Khalifatul Masih(aba).