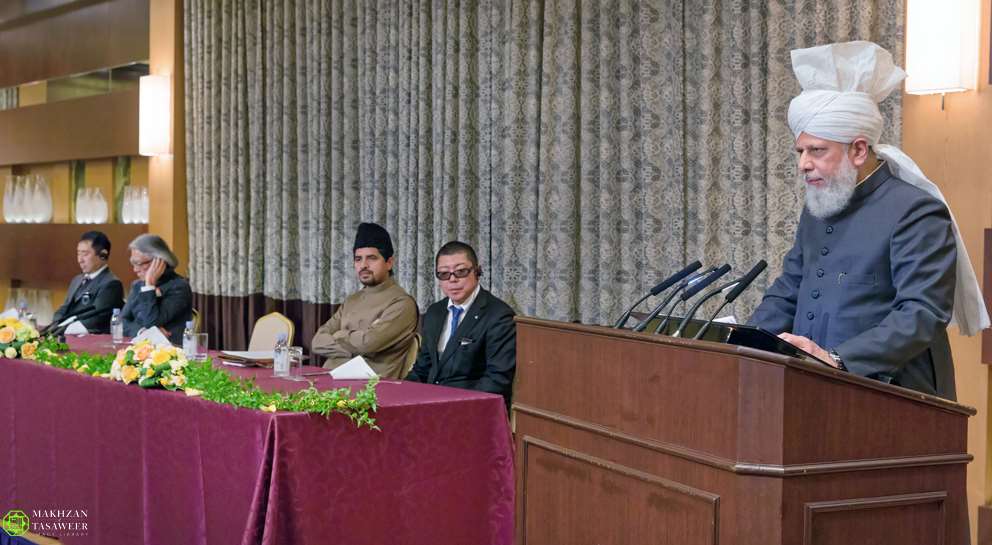 On 23 November 2015, the World Head of the Ahmadiyya Muslim Community, the Fifth Khalifa (Caliph), His Holiness, Hazrat Mirza Masroor Ahmad, delivered the keynote address at a special reception held in his honour at the Hilton Hotel in Odaiba, Tokyo. 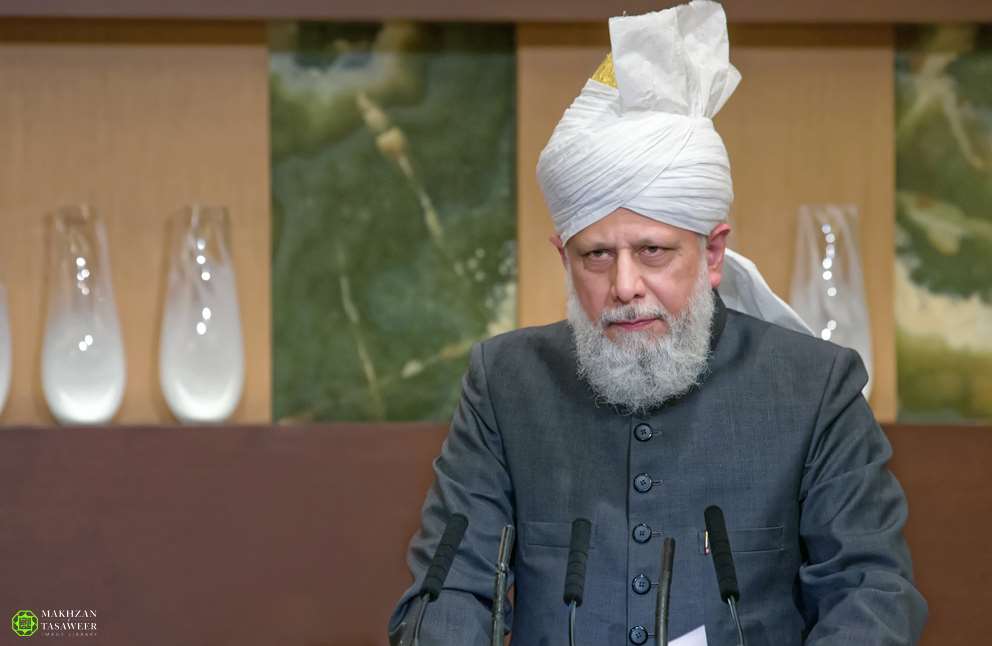 More than 60 guests attended the reception, during which His Holiness reflected upon the nuclear attacks that took place in Hiroshima and Nagasaki 70 years ago and described them as an “attack that shamed humanity”.

“In the modern world the scope of warfare is much more vast than in previous eras. Conflicts in one part of the world do not remain limited or local, rather their effects and consequences spread much further afield. The mass media and the means of instant communication have transformed the world into a global village.”

“For many years I have been warning that the world should realise that the effects of a war in one region can and will affect the peace and harmony of other parts of the world.”

The Head of the Ahmadiyya Muslim Community said it was estimated that at least 70 million people died in World War Two at a time when weapons were far less destructive than the weapons readily available today.

His Holiness said that this was a cause of huge concern for the world and he spoke of his fear that nuclear weapons could be used again.

“Whilst perhaps the major powers keep nuclear weapons as a deterrent, there is no guarantee that the smaller countries will show such restraint. We cannot take it for granted that they will never use nuclear weapons. Thus, it is clear that the world stands on the brink of disaster.” 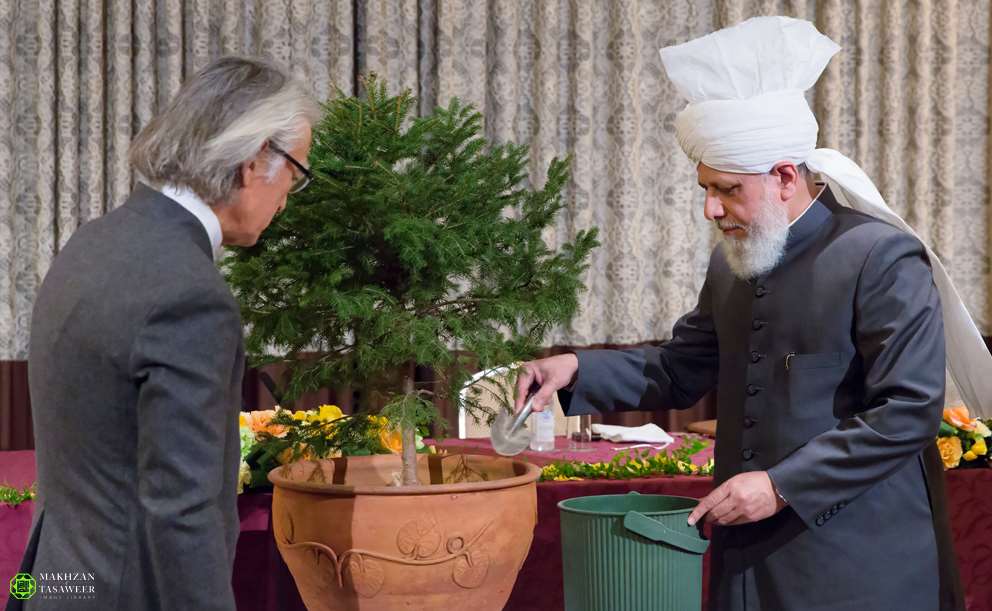 Speaking about the use of nuclear weapons against Japan, Hazrat Mirza Masroor Ahmad said:

“This year marks 70 years since those desperate days in history when nuclear bombs were dropped on Hiroshima and Nagasaki inflicting utter destruction, misery and torment upon your nation.”

“Your nation of Japan had to contend with the most horrific devastation and grief imaginable when hundreds of thousands of your citizens were mercilessly killed and two of your cities were demolished and destroyed in nuclear attacks that shamed humanity.”

Speaking of how Japan’s history meant its people were uniquely positioned to understand the hurt and misery of warfare, Hazrat Mirza Masroor Ahmad said:

His Holiness quoted the words of the Second Khalifa (Caliph) of the Ahmadiyya Muslim Community, His Holiness, Hazrat Mirza Bashir-ud-din Mahmood Ahmad following the nuclear attacks on Japan.

His Holiness, the Second Khalifa had said:

“Our religion and moral teachings demand of us that we proclaim before the entire world that we do not consider this horrific act and this bloodshed to be justified in any circumstances whatsoever. It makes no difference to me whether certain governments do not like what I am saying.”

Hazrat Mirza Masroor Ahmad condemned post-war sanctions that were levied on Japan and quoted from an address given by Pakistan’s first Foreign Minister, Sir Chaudhry Muhammad Zafrullah Khan, an Ahmadi Muslim, at the San Francisco Peace Conference of 1951 in which he had openly opposed the introduction of sanctions on Japan.

“Following the conclusion of World War Two, Sir Chaudhry Muhammad Zafrullah Khan spoke out and condemned attempts by certain powers to place unfair sanctions on Japan. His address at the San Francisco Peace Conference was based on the teachings of the Holy Quran and the life of the Holy Prophet of Islam (peace be upon him).”

“Chaudhry Zafrullah Khan gave this historic statement in defence of Japan because as an Ahmadi Muslim, he was not merely representing the Pakistani State, but first and foremost he was representing the exalted teachings of Islam.”

Describing the state of today’s world as

“Although a Third World War has not been officially declared, in reality a global war is already taking place. Throughout the world men, women and children are being killed, tortured and subjected to the most heart-breaking cruelties.”

“At every level and in every possible way, the Japanese Government should seek to counter and prevent all forms of inhumanity, persecution and injustice. They should seek to ensure that the heinous attack they faced is never repeated again in the future anywhere in the world. Wherever the flames of war are igniting, Japan’s leaders and people should play their role in easing tension and establishing peace.”

Later in his address, Hazrat Mirza Masroor Ahmad cited various verses of the Holy Quran proving Islam’s commitment to peace, tolerance and religious freedom. He said that Islam did not permit any war for the sake of “geo-political” or “economic benefit” and that all nations should be allowed to prosper and develop.

“Our Gracious and Merciful Lord has given us the keys to peace because He desires for His Creation to live together harmoniously and to be free from all hatred and discord.”

“Let us fulfill our obligations and join together. Rather than grouping together in opposing blocs, we should all unite and co-operate with one another. We have no other viable option left because if a full-fledged Third World War occurs then the resulting devastation and trail of destruction is unimaginable. No doubt we will then consider the wars of the past to have been quite minor in comparison.”

“May Allah grant wisdom and intelligence to those who are causing conflict in the name of religion or who are conducting wars for the sake of geo-political or economic benefits. May they come to realise how senseless and destructive their pursuits are.”

“His Holiness, Hazrat Mirza Masroor Ahmad has devoted his entire life to spreading peace in the world. Inter-religious peace and dialogue is his life’s mission. It is my dream that His Holiness moves to Japan permanently so that true Islam is ingrained within our country.”

Mr Endo Shinichi, from Tohoku, the region most affected by the 2011 earthquake and tsunamis, said:

“The support and help offered by the Ahmadiyya Muslim Community in Japan following the earthquake four years ago is something we can never forget. You helped us when we needed help more than ever before. It is due to your help and love that many of us are still alive and we can never repay this debt of gratitude.”

Later, His Holiness answered questions from members of the audience about the true teachings of Islam. The reception concluded with a silent prayer led by His Holiness. 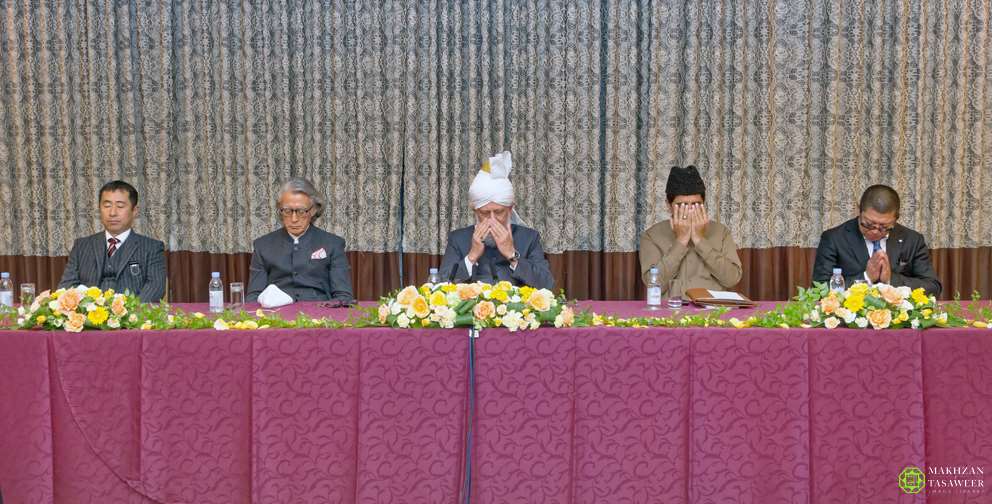