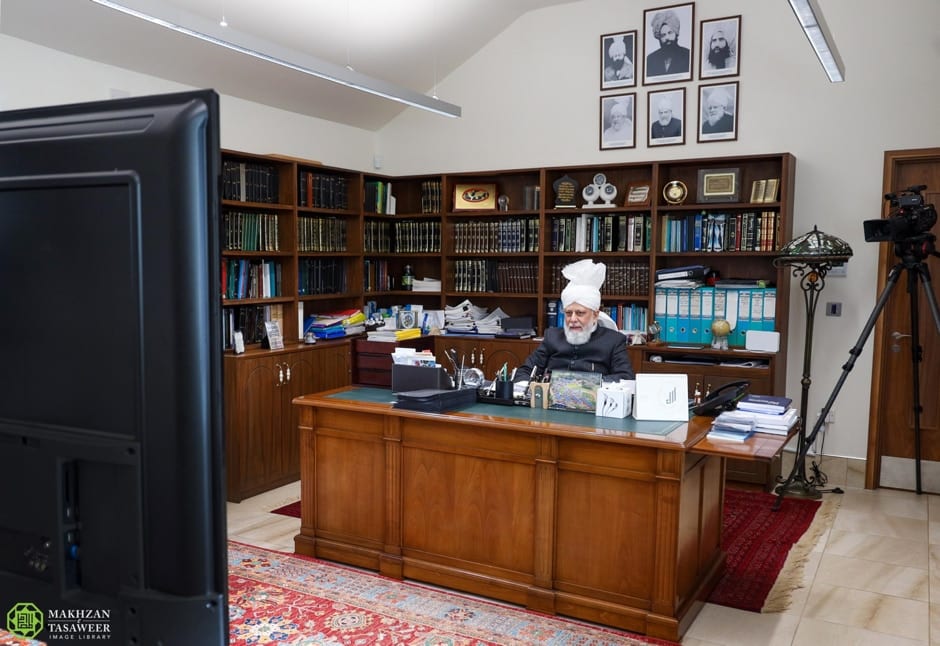 His Holiness presided the meeting from his office in Islamabad, Tilford, whilst the Amila members joined from the Darus Salaam Mosque complex in Rose Hill, which serves as the National Headquarters of the Ahmadiyya Muslim Community in Mauritius.

During the sixty-five minute meeting, the National Amila members had the opportunity to present a report about their respective departments and to receive the guidance and instructions of His Holiness on a range of issues.

His Holiness stated it was necessary for the national administration to keep close contact and to give regular feedback to the local Majlis-e-Amilas so that they remain motivated and were able to better their efforts to spread the true teachings of Islam.

During the meeting, His Holiness also spoke of the importance of the education of girls and expressed his desire that some Ahmadi Muslim girls in Mauritius would pursue medicine and qualify as doctors so that they could serve humanity.

Regarding Tabligh (outreach), His Holiness said that the Lajna Amila administration should strive to spread the message of Islam throughout Mauritius. He expressed his hope that Mauritians would join the Ahmadiyya Muslim Community in extremely large numbers in the coming years.

Towards the end of the meeting, His Holiness was asked how the Lajna Imaillah administration and individual Ahmadi Muslim parents could protect their children from harmful societal influences.

“When a child is born, the Adhan is called at his right ear and the Takbir is called at his left ear because Allah knows that the moral training starts from the very beginning of a child’s life. Thus, from the very beginning, you should guide and instruct your children with love and care reminding them that they are Ahmadi Muslim and so they should always respect and honour their religion.”

“At the age of 5 or 6, you should encourage your children to offer a prayer daily and, additionally, when you yourself are praying you can sometimes ask your child to stand by your side and to follow you. Then, between the age of 7 to 10 you should encourage your children to offer at least three or four of the daily prayers. From the age of 10, the child should know that it is necessary for them to offer all the five daily prayers and you have to keep reminding them that, as Ahmadi Muslims, they must fulfil the commandments and injunctions of the Holy Quran and of the Holy Prophet (peace and blessings be upon him). Of course, you have to be very loving to your children so they understand that whatever their parents are asking them, it is for their good.”

“At the same time, a parent’s own example – both the father and the mother – is also crucial. If you, as a parent, are not behaving well towards your children and your own behaviour is not good towards your fellow people and if your attitude in the house is not good as husband and wife then it will impact and have a negative effect upon your children’s faith. So you must set a positive personal example for your children and live your lives according to the teachings of Islam. If you train your children in this way then they will be less affected by the harmful aspects of the wider environment and society, God Willing.”